With a simply magnificent lob on match point from the ropes, Andy Murray secured victory over David Goffin and the Davis Cup for Great Britain, ending yet another drought for his nation. Going into the day 2-1 up, courtesy of victory in the doubles, Murray's win ended a wait since 1936 for the Brits as they secured an unassailable 3-1 lead and the trophy.

When the UK played Turkey in a Group II relegation decider back in 2010, where a team with the likes of Jamie Baker and Ken Skupski secured a 5-0 win, not many would have predicted that less than six years later, they would be the world champions.

But they are, having produced a stunning year of tennis, particularly in their two boys from Dunblane, who have been sensational throughout.

It was rather fitting, then, that the title was secured by the younger Andy, who had won the decisive doubles with his brother Jamie on the day before, as the world number two simply had too much for David Goffin.

(See our LIVE coverage of the final here)

From the first moment to the last, the Belgian crowd clapped and cheered any sign of weakness or pressure on the Brit, but this only seemed to entice Murray, as he saved break points with two stunning serves early on in the match, and eventually broke down the resistence of the Belgian in the following game to go a break up.

From here, he rarely looked back, securing the first set with a masteful service game, before romping to the second. Britain were ever so close now, and as the Brits in the crowd began to pump up the volume, Goffin suddenly looked like a defeated man.

He had come from 0-2 down on day one to defeat the surprise choice, Kyle Edmund, but against the world number two, a repeat never seemed likely. He stayed with Murray for the most part, but never looked like breaking down his defensive wall.

Sealed with a lob

And it would be Murray who would secure the victory on a stunning last point. With both break and match point at 30-40 on the Goffin serve, the two became involved in a lengthy rally which looked to have climaxed when Goffin played a stunning winner down the line. However, almost inexplicably, Murray got his racket to the ball, playing a weak shot towards Goffin who had moved in for the kill.

He looked to have done so, as he played a measured forehand down the opposite line, but Murray had done so well to read it, scampering to the other side and incredibly having the composure to play a stunning lob which rose just out of the reach of Goffin and landed in the court, sparking wild scenes as he secured a 6-3 7-5 6-3 win.

Murray dropped to the clay court floor in tears and was suddenly swarmed by his team, who piled on top of him in delight. To Murray's credit, he then went straight to the Belgian team and Goffin to offer his condolences and they their congratulations. 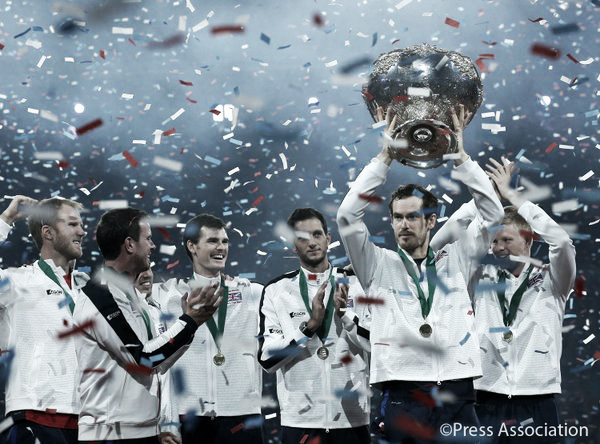 It had been a stunning final, and at times during the first two days, it looked like it could have gone either way.

Thank you for supporting our Davis Cup coverage for the year and our year as a whole. We'll continue to be here with all the reaction and analysis of the Davis Cup, and look forward to you joining us.

You may also like, our look at how Great Britain reached the final: https://www.vavel.com/en/tennis/571130-davis-cup-world-group-review-belgium-and-great-britain-defeat-the-odds.html