xSecond seed and defending French Open champion Rafael Nadal started his quest for a record-extending 12th title in Paris in fine style on Monday afternoon, with the Spaniard easing past German qualifier Yannick Hanfmann to reach the second round.

Hanfmann is a talented player, with huge groundstrokes and a good net game, though with a ranking of 184th he was not expected to test Nadal, a man who has won his past 16 matches at the tournament, and has only lost twice in his whole career here. 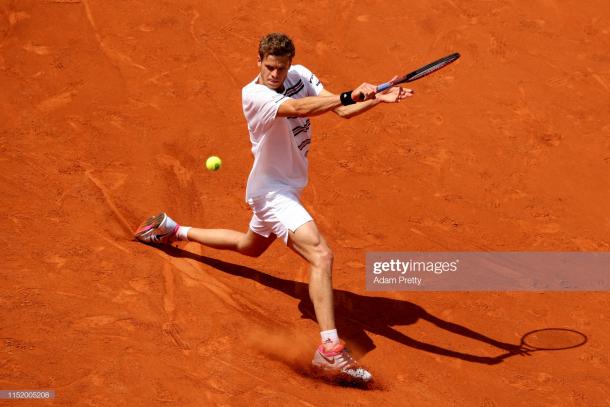 The German troubled Nadal ever so slightly in the very opening stages, though the Spaniard quickly took control and unsurprisingly dominated proceedings, breaking six times in a dominant 6-2, 6-1, 6-3 victory in just an hour and 57 minutes on Court Philippe Chatrier.

After three semifinal losses on clay earlier this season, Nadal’s run to the title secured his position as the favorite for the title, and he proved once again why he is the man to beat this year with a strong first round performance.

Hanfmann came out aggressively and that tactic almost paid off, though the German failed to convert four break points in the opening game, and Nadal made him pay the price as he himself broke, consolidating for a 3-1 lead. The German was able to hold in his next two service games, though Nadal was not troubled any further on his serve, and comfortably broke for a second time to seal the opening set in convincing fashion.

After the tricky game to start set one, Nadal was quickly in control of the second set, once again breaking early as he raced to a 3-0 lead. Hanfmann was able to avoid the bagel by holding for 1-3, though could not hold for a second time two games later as the Spaniard broke for 5-1. Nadal did find himself down 0-30 when serving for a two set lead, though quickly turned things around to seal a two set advantage.

Unlike in the previous two sets, Hanfmann successfully held in his first service game, though Nadal did not waste any further time, breaking at the next attempt and consolidating comfortably to put himself just three games from victory. The German fought hard, holding his own serve twice, but could not threaten the Spaniard, and Nadal broke once again in the final game of the match to seal victory.

It was an unsurprisingly comfortable victory for the 11-time champion at Roland Garros, with the Spaniard hitting 25 winners to just 16 unforced errors. He will face another qualifier in the second round.