Manchester United will re-sign 35-year-old striker Zlatan Ibrahimović as early as this week, according to ESPN's Andy Mitten.

The Swede has been recovering as a free agent having suffered knee ligament damage in Man United's UEFA Europa League semi-final against RSC Anderlecht in April. He missed the Reds' victory in the final of said competition in his home country of Sweden.

Ibrahimović has been recovering from knee ligament damage

Present on the night in the Friends Arena, Ibrahimović has spent time at United's AON Training Complex recovering from surgery he underwent in the USA. His contract ran out in June and it was thought that United would wait until the January transfer window to offer Ibrahimović a new contract, given his recovery was assumed to last into 2018.

Signing Ibrahimović on a deal now will allow the Reds to register the striker in this transfer window, otherwise having to wait until January.

For a player of 35, Ibrahimović's recovery, so far, has been remarkable. Players' careers have been ended by similar injuries, particularly players of the striker's age.

Ibrahimović will sign a contract worth significantly less than the deal he signed at United last summer, according to ESPN. That's unsurprising given that the Swede will return from injury to be behind Romelu Lukaku in the attacking pecking order, and potentially also youngsters Anthony Martial and Marcus Rashford. 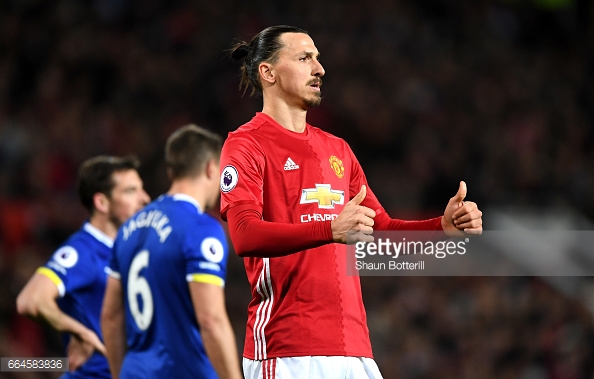 Ibra will return on a lesser wage

He had been linked with a move to MLS side LA Galaxy but preferred a return to United despite the wage cut due to his excellent relationship with manager José Mourinho.

The pair worked together at Inter Milan before Ibrahimović joined United on a free from Paris Saint-Germain. Ibrahimović has also had a huge impact on the dressing room at Man United, and reports in previous months had suggested that the Swede could take a coaching role at the club when his playing career comes to an end.

As with his time at PSG, Ibrahimović has played a role in improving the mentality of the players surrounding him. That, of course, as well as his 28 goals in a red shirt last season in all competitions, making him by far and away United's top goalscorer.

A trip down memory lane: That night at the Parc des Princes a day ago

Opinion: The biggest winners from Manchester United's victory over Newcastle United 2 days ago