Manchester City's winning machine came to a slight halt this afternoon as a fantastic Newcastle United side held them to earn a well deserved point.

After going one down early on thanks to Ilkay Gundogan, Eddie Howe's men reacted brilliantly to pull three back with Miguel Almiron, Callum Wilson and Kieran Trippier all netting to lead 3-1 just ten minutes into the second half.

City managed to pull two back themselves however, in the space of just four minutes, courtesy of Erling Haaland and Bernardo Silva, sending the champions back to Manchester with a point. Aside from a fantastic game of football, here is four things we learnt.

City's long running hunt for a centre forward was well documented over the past few seasons, with Pep Guardiola receiving plenty of criticism for his persistence with a false nine, but that issue was most certainly solved this summer with the signing of Haaland.

The Norweigan scored again on Tyneside notching his third goal of the season to add to an assist in his previous game. Haaland's goal was showed his strikers instinct and the ever-present danger he presents, being alive in the box to predicts an opportunity falling to him after a knockdown from a corner to the back post.

This killer instinct and ability to sniff out a chance is what the Cityzens have missed in previous years when playing a false nine, leaving them reliant on their ability to pass the ball into the back of the net. The 22-year-olds pace and power also adds a further dimension to City's play, giving them a superb outball going forward as Haaland looks to get in behind.

Aside from the striker's two goals against West Ham United on opening day, the champions have now had three different goal scorers in both of their previous two games. With Haaland's well documented eight touches against AFC Bournemouth, the 4-0 hammering they gave out shows City can still perform without relying on the new number nine to be at his best.

Guardiola's side's reliance on midfielders and wingers to contribute whilst playing a false nine in previous seasons seems to serve them well going forward. Gundogan's late runs from deep in particular are serving them well, with the German scoring two goals from midfield so far this season.

What champions are made of

After Liverpool's surprising draw at home to Crystal Palace,, many claimed the title race was already done as the Reds found themselves four points behind City just two weeks into the Premier League season.

However, Sunday's performance was not what we have come to expect from the blue side of Manchester. Conceding three goals and looking vulnerable defensively, especially on the counter, City will not be happy about it but will have to count themselves lucky to escape with a point.

Haaland's double and a clean sheet against West Ham on opening day followed by the dismantling of newly promoted Bournemouth left the rest of the league wondering where the Cityzens were going to drop points.

Performances like the one at St James' Park will leave the chasing pack with far more hope than they had heading into the weekend, but to be able to come back from two goals down and get some form of result against a brilliant Newcastle side whilst not playing well yourselves is certainly the hallmark of champions.

Allan Saint-Maximin was simply superb against the champions, running rings around Kyle Walker - arguably the best right-back in the league - with his pace, skills, and directness being far too much for the visitors to handle.

Howe's side played the majority of the game on the counter allowing City to have vast amounts of possession, particularly in the first half, with the Frenchman's pace and sheer determination to get in behind causing havoc for the defence.

The way Guardiola's men play reply on pushing both full-backs in-field in possession to play as midfielders, with Rodri dropping back for defensive cover and to form a back three with the regular centre-backs.

However, this worked perfectly for the Magpies, with their counter-attacking approach leaving Saint-Maximin running directly at the opposing centre-backs - mainly John Stones - as Walker was still in a midfield position, something the City defence simply could not handle.

The 25-year-old got two assists for his troubles, the first a cross for Almiron to bundle home off his thigh at the back post, the second, running inside directly at Stones on the break, playing a ball into the feet of Wilson to finish brilliantly with the outside of his right boot. Saint-Maximin's interlink with his fellow forwards was vital to the hard earned point, and something Newcastle can certainly build on going forward.

Since the arrival of new owners last season, and particularly the appointment of manager Eddie Howe, things continue to look up on Tyneside. After multiple seasons barely surviving relegation with little money to spend, Newcastle are now thriving in their new era and continue to push up the table.

After three league games against Nottingham Forest, Brighton and Hove Albion and Manchester City Howe's side remain one of seven sides to be unbeaten having palyed three games. The Magpies are still continuing to reep the rewards of the new ownership, after multiple much needed signings in their first window in January, the Saudi backed side have invested again this summer - and wisely.

After spending over £59m on Dutch centre-back Sven Botman from LOSC Lille in France, making the loan signing of left-back Matt Targett from Aston Villa permanent, and adding highly rated goalkeeper Nick Pope from relegated Burnley, they look like they have certainly made some crude deals, only conceding three goals in their opening three games, with all three coming against City, thanks to their new recruits at the back.

Further forward, the midfield trio of Bruno Guimaraes, Joe Willock and Joelinton (who provided an assist on the opening day) are working well in midfield, providing energy and creativity in equal measures. Whilst the front three of the aforementioned Saint-Maximin, Howe favourite Callum Wilson and a rejuvinated Almiron form a dynamic and high-tempo front three, with Wilson on two goals, Almiron with one goal and Saint-Maximin providing two assists so far this season.

The Magpies find themselves in sixth place in the league, with 5 points from three tricky opening games a solid return for a side hoping to finish well in the top half this season. Looking ahead they face Wolverhampton Wanderers, Bournemouth, Fulham and Brentford all in their next seven league games, all of which are winnable games - things are certainly looking up on Tyneside. 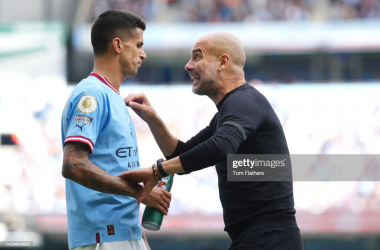