Second round matches at the Abierto Mexicano Telcel and there was some drama today as the second seed, Kristina Mladenovic played an intense match that lasted over three hours in which she defeated Heather Watson. Monica Puig played solid tennis to defeat Daniela Hantuchova and the top seed, Mirjana Lucic-Baroni only needed two sets to outlast Shelby Rogers.

The first match of the day on Center Court as Olympic champion, Monica Puig faced former Australian Open semifinalist, Daniela Hantuchova. It was an erratic start for both players as they committed several unforced errors during the first four games in which neither had break point opportunities. Puig started to step up her game after completing a hold to love to level things to 3-3. The Puerto Rican created three break opportunities, and while the Slovak was able to save one, Puig proved to be stronger and broke for the first time in the match to lead 4-3. After a solid hold on the fourth seed, it came to Daniela Hantuchova to serve to stay in the set. Monica Puig had two set points, but the Slovak was quick to erase both of them with her serve to put the Puerto Rican under pressure as she now had to serve for the set. The Slovak wasted two break opportunities to come back into the set. A forehand into the net gave Puig the first set, 6-4.

The second set started off with an exchange of breaks. It didn’t take long until Monica Puig was able to regain the lead as she broke Hantuchova in the third game to later consolidated the break with a hold to 15 to extend her lead to 3-1. The momentum seemed to be on the Puerto Rican’s side, especially when she converted another break, but Hantuchova didn’t waste any time to recover one break. The Slovak had to erase another break point to avoid extending the lead of Puig. Serves were exchanged and now Monica Puig had to serve for the match. It was not easy for the Puerto Rican who lost four chances to close the match. Daniela Hantuchova stormed a forehand winner to create a break point opportunity, but Puig saved it. The fourth seed would require of two more match points to serve out the match. After one hour and 40 minutes, Monica Puig defeated Daniela Hantuchova 6-4, 6-4. 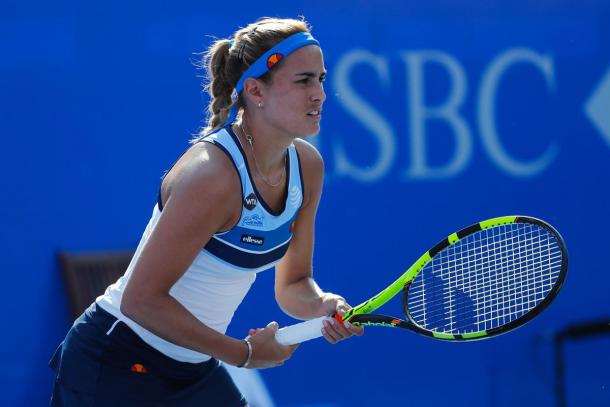 While Puig completed her win on Center Court, things were about to start on Grand Stand as the second seed, Kristina Mladenovic took on Heather Watson. The first set was not very consistent as both players lost their serves in the first two games, and then Mladenovic was broken to give Watson a 2-1 advantage. The Brit was also the first one to hold serve for a 3-1 lead. But once again, both players lost their serve in the next to games. For the first time in the set, Kristina Mladenovic held her serve and the broke Watson to level the match to 4-4. Both players kept holding their serves to force a tiebreak. The tiebreak continued the drama as it was Mladenovic the first one to break, only to lose the lead two points later. At the end, it was the Frenchwoman who prevailed to take the first set 7-6(4)

The second set was a bit more consistent as there were fewer breaks. There was an exchange of breaks at the start but then both players rose their level and held for the next games until it was now Mladenovic who lost her serve at a crucial moment. Heather Watson was now serving for the set, but the second seed was not willing to let this set go as she broke back and the held to level to 5-5. On her serve, Watson faced one more break point which could have sentenced the match, but she proved her skills at the net to save it. The second set had to be decided in a tiebreak again. Both players suffered three mini breaks, and with the tiebreak set at 5-5, the next point would be the set point for any of them. A backhand unforced error from Mladenovic handed that set point to Watson who fired up a forehand to end the second set. 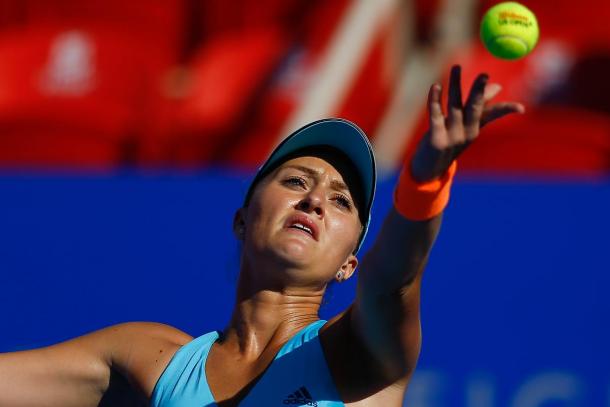 The third set seemed to be less dramatic and intense, especially when Mladenovic found the break in the sixth game. Watson tried to pull a comeback, but the Frenchwoman erased those break opportunities to go up 5-2. After a hold from Watson, it was now time for Mladenovic to finish the match on her serve but more double faults came and she was broken, putting the Brit back into the match. Both players exchanged holds and the set seemed to go to another tiebreak, but Mladenovic smashed a winner to create a match point opportunity. On match point, Watson did her 18th double fault to give Mladenovic the match, 7-6(4), 6-7(5), 7-5. In a match that lasted over three hours, Kristina Mladenovic hit 20 double faults, while Watson hit 18.

The first seed followed the longest match in the day, and she wasn’t planning to spend three hours on court as well. Mirjana Lucic-Baroni took on Shelby Rogers. The top seed pounced some big serves but the American returned them with the same power which complicated the game to the Croatian. After breaking Lucic-Baroni, Rogers wasn’t able to consolidate the break as she lost her own serve. The Croatian used her powerful serve to take a hold to love to go up 2-1 and then proceeded to break Rogers for a 3-1 lead. Just like in the start of the match, Lucic-Baroni was not able to confirm the break and after a hold from Rogers, the match leveled to 3-3. Another exchange of breaks seemed that this set would go to a tiebreak, but the top seed held without losing a point to lead 5-4. Eager to take the set, Lucic-Baroni pounced a backhand winner to take the first set, 6-4.

The second set was a replay of the first set for the first five games as it began with an exchange of breaks followed by a hold from Lucic-Baroni to later exchange breaks again. Both players struggled to find the momentum, as they were playing fantastic tennis, barely losing points on their serves. After some solid games, Rogers had to serve to stay in the set but Lucic-Baroni saw an opportunity and took it when Rogers returned a ball into the net. After 1 hour and 26 minutes, Mirjana Lucic-Baroni scored a win over Shelby Rogers, 6-4, 6-4.

Tomljanovic and Goerges retired after one set, Petkovic falls after a three-set battle, Ostapenko, and McHale through the quarterfinals

More action happened in other courts, on Court 1, Julia Goerges retired after losing the first set to Lesia Tsurenko. The German first lost her serve in the fourth game and then was barely able to win a point as the Ukrainian broke for a second time to lead 5-1. Tsurenko completed the win with her serve. Goerges retired from the match due to heat illness.

Kristen Flipkens took on Ajla Tomljanovic, the Croatian who had been away from the tennis court due an injury came back and played her first match in the first round of Acapulco where she stunned Eugenie Bouchard in straight sets. However, on Wednesday things changed and she was forced to retire from her match against Flipkens. The pair traded serves in the first two games, but then each player was able to hold their serve without facing a break point until the ninth game when the Croatian broke, only to be broken right away. Flipkens held her serve, only losing a point on it. After a lengthy game, Flipkens found the break to take the first set 7-5. Tomljanovic cited shoulder injury as the reason for her retirement. 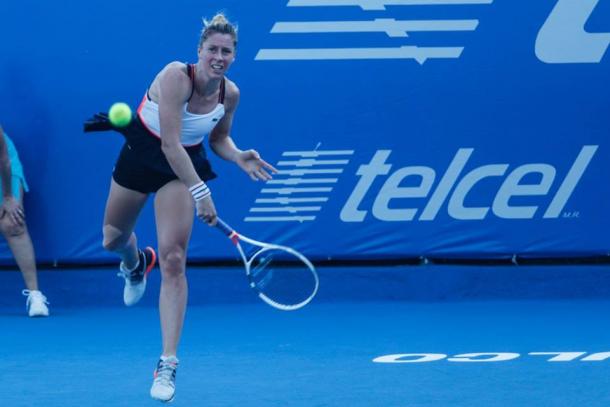 On Court 1, Andrea Petkovic didn’t have a great day as she lost to Pauline Parmentier. It was a tough set of tennis for both players as there were few break opportunities. It wasn’t until the fifth game when Petkovic was broken only to recover the break in the next game. Once again Parmentier grabbed the German’s serve and that was also she needed to take the first set 6-4. In the second set, there were six straight breaks to level the match to 3-3. It was Petkovic the first player to hold her serve, not yielding a point to go up 4-3 and later break to lead 5-3.

Only one set point was needed for Petkovic to take the set 6-3 and force a decider. After winning the second set, it seemed like the German run out of stamina as she was broken during her first game. Now it was the Frenchwoman who was in total control of the situation, barely losing points on her serve. The sixth game proved to be crucial as the Frenchwoman broke again to win the chance of serving for the match. Petkovic attempted a come back as she had a break point, but Parmentier erased it to later take the match 6-4, 3-6, 6-1.

Americans were also in action yesterday as Christina McHale, who always does good in the tournament, reached the quarterfinal after defeating another American, Taylor Townsend. Only two breaks were necessary for McHale to take the opener 6-1. The second set didn’t see any breaks and it was forced to be decided in a tiebreak which McHale won to take the match, 6-1, 7-6.

Madison Brengle was not able to defeat Jelena Ostapenko, the third seed. The first set had six straight breaks before each player held their serves. It seemed like the set was bound to be decided on a tiebreak, but Ostapenko found the break at the perfect time and she took the first one 7-5. The second set also saw many breaks, but the third seed had one more and took the match 7-5, 6-4.

Women will take on Grand Stand Caliente to play their quarterfinals matches. The day will start with Christina McHale as she plays Monica Puig. Then Kristina Mladenovic will take on Kristen Flipkens. After that match, Jelena Ostapenko and Lesia Tsurenko will fight for a spot in the semifinals. The day will end with the top seed, Mirjana Lucic-Baroni as she faces Pauline Parmentier.