Somewhat of a surprise to most, it was a staggering discovery to learn that Liverpool haven't only rejuvenated their interest in highly-regarded midfielder Naby Keïta, but have actually agreed a deal in principle for the Guinea international to sign for them.

The 22-year-old was a reported target for the Reds for the majority of this transfer window and after several approaches from the Merseyside outfit, the club have finally acquired their man.

Keïta earned rave reviews last term with RB Leipzig upon their first ever promotion to the German top-flight; accumulating eight goals and the same number of assists in a measly 31 outings. However, it is his style of play that has fans eagerly excited to see him at Anfield from next summer.

A keen box-to-box playmaker, Keïta is somewhat comparable to Chelsea's impressive Frenchman N'Golo Kanté. The stamina he can offer is mystifying and will predictably offer a lot to this determined Liverpool team, and Keïta appears to offer a significantly improved attacking threat than Kanté.

Did Liverpool's midfield need reinforcing in the first place?

In recent weeks, especially in the dominant display at home to Arsenal, the Reds' midfield has ran the show and it is quite apparent that Jürgen Klopp has worked tirelessly behind the scenes to improve his team in the middle of the park.

The boss has already prided himself on attacking football and specifically in the performance against the Gunners, it was the midfielders who regularly pressed and won the ball - almost making that barrier of three, consisting of Emre Can, Jordan Henderson and Georginio Wijnaldum, a brick wall. All four goals arrived from Arsenal starting in possession and a Liverpool high-press.

Adding to that, Liverpool's midfield is certainly not lacking in numbers. Agreeable that back-ups are pivotal with Champions League football on the horizon, Keïta will definitely add strength-in-depth but this arrival may just shadow the infamous youth academy the Reds are renowned for.

Cameron Brannagan, one of those highly-talented prospects to come out of the ranks at Anfield, is yet to make an appearance and the club's latest recruit may just mean he'll have to envisage his future away from Merseyside.

Other youngsters could too fall by the wayside as a consequence of Liverpool's desire to put together a top-class team. 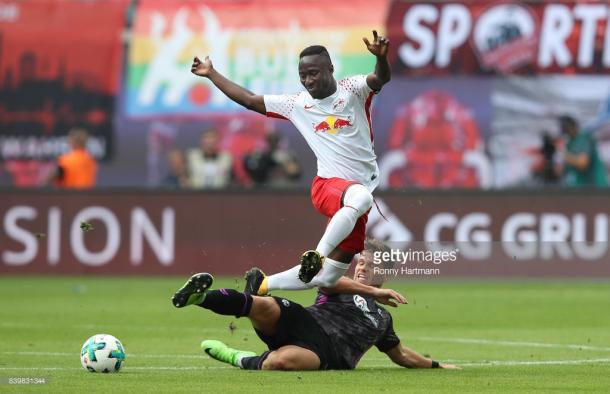 Can Keïta become an automatic starter next season?

It surely reads that Liverpool's well-reported chase for Keïta's signature, and the rumoured fee of £64 million being thrown about, that the player is a certain starter under Jürgen Klopp upon him officially joining the Reds in July 2018.

However, Liverpool's immaculate midfield trio hasn't put a foot wrong in recent weeks and that is vital for momentum as we head into the international break.

Emre Can has been one of the more superior improvements in Liverpool's squad from last year. The German, who appears to play in the same or very similar position to Keïta, has performed superbly and even grabbed himself goals - which makes a refreshing change.

Obviously, there's a lot of game time between now and pre-season next year, and a lot can still change in the shape of Klopp's midfield - but the signs are positive in the current climate.

Keïta might not necessarily a instant spot in the starting eleven with Can seemingly appearing to be a reformed player and he will certainly have to continue his performances in the Bundesliga if he is to ensure himself a guaranteed place on the manager's team-sheet.

He is still a magnificent signing for Liverpool, there is absolutely no denying that, but Keïta has a long way to go between now and his arrival to fully make a huge contribution to the club's fortunes.

The Warm Down: Reds back to winning ways in the Premier League 3 days ago

Ajax 0-1 Liverpool: Reds open account with a clean sheet and a win in Amsterdam 7 days ago

The Warm Down: Derby day drama as VAR steals headlines again&nbsp; 11 days ago