Swinging his left boot at the ball, like a golfer looking to land their shot on the green, Foden’s inch-perfect pass for Bukayo Saka’s goal was yet another golden moment in what is shaping up to be a superb season for the Stockport born superstar.

Whilst not unusual to see the City man delight on a football pitch, what did catch the eye was the position the pass came from, with Foden providing the assist deep inside the England midfield.

Fresh from a (joint) Man of the Match performance in City’s exhilarating top of the table ding dong battle against Liverpool last weekend, Foden tormented make-shift Reds’ right-back James Milner,earning plaudits for his exceptional ability from out wide.

Netting for the second time in as many trips to Anfield, Foden displayed the sort of quality that has seen him nominated as a shortlisted candidate for the Ballon d'Or, despite his tender age.

The 21-year-old appears to elevate his game whenever he takes to the field, yet if there has been one criticism of Foden, it has been his inefficiency when used down the middle, as opposed to on the flank.

Foden star of the show in Andorra

Granted, performances against minnows Andorra won’t define Foden’s career, yet when used as a deep-lying playmaker in England’s most recent win, Foden answered the questions hanging over his head in emphatic style.

Dictating the play in an almost quarter-back like fashion, the City academy product wasn’t afraid to display his full passing range, often found spraying passes out to either full-back, where Gareth Southgate’s side would build most of their attacks.

Suffocating their opponents with the ball at their feet, England enjoyed a whopping 83% possession throughout the 90 minutes, with Foden registering over 9% of England’s total time on the ball, as per WhoScored.com.

Add into the mix Foden’s impressive 95% pass completion rate and the numbers correlate to a sensational runout in what was unquestionably Foden’s best England performance since making his debut in September 2020.

It was Foden’s first England appearance since coming off the bench during their triumphant 2-1 semi-final victory over Denmark in the European Championships and the dynamic City attacker exposed a side to his game never seen for the national team before.

Mainly used as an attacking midfielder in the summer, his performance against Andorra displayed maturity beyond his age, whilst highlighting his versatility to both England boss Southgate, but also City manager Guardiola.

Foden may be key to City charge on all fronts

It’s unlikely Guardiola will turn to Foden and ask him to operate in the City middle just yet, given the strength the Blues have shown already this season in central areas, with the likes of Bernardo Silva,, Kevin De Bruyne and Rodri snatching the headlines from their exploits in the engine room.

However, it may be something City can look at when tasked with the challenge of breaking down teams that deploy deep blocks, as seen in the reigning Premier League champions 0-0 stalemate with Southampton last month.

Foden’s assist for England’s second was just the sort of incisiveness Guardiola’s men lacked in that fixture and with chances often wasted by the Blues, an extra source of creativity would be a welcome addition.

Of course, Foden’s quality from all areas of the pitch has been well known for some time and for those who have tracked his progression from a top of the class academy star, to a regular Premier League starter will be well aware of his abilities.

Yet, the elegance with which he played with in Andorra la Vella may suggest Foden is ready to be given the midfield reigns at both international and domestic level and what a terrifying prospect that could prove to be for opposition sides.

The Warmdown: City outclass Brugge in dominant victory 4 days ago

The Warmdown: City strike back twice in Premier League blockbuster 20 days ago 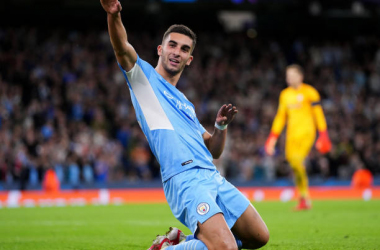