There aren't many people talking about last year's US Open finalist Madison Keys, but she is quietly making her way through the draw- head down, no fuss.

The first few games of the match were pretty uneventful with both players trying to settle. The American was dominant on serve, whilst also putting pressure on the Romanian's service games. This pressure came in the fourth game of the first set when Bogdan had to save two break points at 15-40. Both of them saved after unforced errors from Keys. A lovely drop shot from Bogdan set up game point, which was then taken on another Keys error.

The match then continued on serve with the American hitting some powerful forehand shots, forcing the Romanian into errors. The break finally came in the eighth game, with Bogdan going up 40-15 before being pegged back. The Romanian did save a break point when Keys hit a forehand into the net, however, she couldn't save the second as a powerful Keys backhand forced Bogdan into another error, giving the American the chance to serve for the set at 5-3. Another comfortable service game followed and Keys managed to take the first set on the first attempt after a strong serve drew another error. 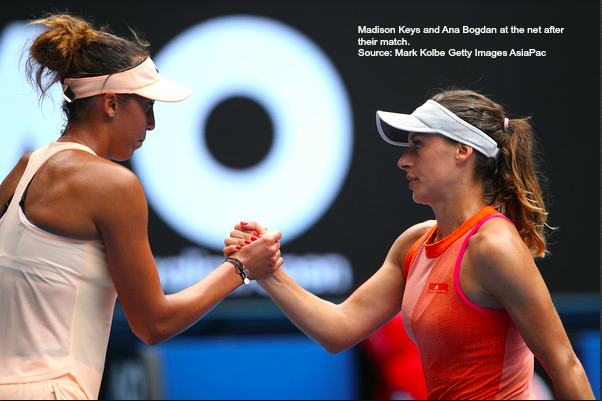 Keys has got the power

The second set started the same as the first with both players managing to hold in their opening service games. However, unlike in the first set, Keys managed to get the break early. Another long forehand from Bogdan giving the break of serve away.

The American continued to show her powerful ground-strokes with a couple of good smashes; the Romanian struggling to cope with the sheer power coming from the other side of the net. Bogdan did get herself into some good positions, however, she lacked conviction and consistency in the pivotal moments.

Although, the Romanian did get a couple of chances in the final game of the match. She managed to get herself three break-points; the only break-points that the American faced all match.

Keys saved them all with some strong net play; she was 11/11 on net points won throughout the match. A long backhand from Bogdan set up match point for Keys, which was taken on another error from the Romanian after a strong forehand landed right on the baseline from Keys.

Another strong all-around performance from Keys who hit 6 aces and 29 winners compared with 0 aces and 6 winners from Bogdan. The forehand was working really well again today as it has been all tournament so far. Not surprising really as the American has been working on it during the off-season.

She said, "I spent a lot of my time the first couple of weeks just doing forehands and wrist rehab, getting that strong."

On her performance during the first week Keys was overall pretty happy with how things have gone.

She said, "I'm pretty happy with it. I think overall I was playing really well and pretty smart. I feel good about it."

The American will be looking to keep her strong start to the 2018 Australian Open going as she faces eighth seed Caroline Garcia in the fourth round, which could be a tough test.