With the Foxes and the Blues sitting at completely opposite ends of the Premier League table, this match brings together two of the most surprising sides in the English top flight.

Sitting 3rd and 16th respectively in the table, both teams will evidently be keen to claim the three points from the King Power Stadium on Monday evening. So, can Claudio Ranieri mastermind a big victory against his former employers?

Despite the Foxes’ recent outstanding form (having gone undefeated in nine games in the league), they go into this clash the firm underdogs because of recent history between the two sides. In 104 matches between the two since the first in 1905, the Midlanders have only managed to take maximum points 24 times. However, 19 of those have been on home soil.

Whereas, the reigning Premier League champions have gained the victory on an astounding 51 occasions. As a matter of fact, Leicester City have not been able to claim any points from their capital-based counterparts in over 14 years - a sequence that has stretched back to a famous 2-1 victory at Filbert Street in 2001. So, this clash at the relatively new King Power Stadium presents a tough test for the red-hot Foxes.

Nevertheless, regardless of the recent drought against Mourinho's team, the undoubted storyline of the game is Claudio Ranieri's reunion with the club he served for four years. Against the Blues, the former Juventus boss has endured limited success. Whilst in charge at the Juventus Stadium, the enthusiastic Italian took on Chelsea twice, gaining one draw and a loss in the UEFA Champions League in 2009.

On the other hand, the 64-year-old does possess a considerably better record against his Portuguese opponent, Jose Mourinho. In his esteemed career, the enthusiastic Italian has come up against the former European Champion on five occasions (which includes the 2011 Copa Italia final). Ironically, this was the only game that Ranieri lost to the 52-year-old Chelsea boss; also gaining two wins and two draws with clubs such as Inter Milan and Roma.

However, as we know from the current campaign so far, the Premier League is far from predictable. 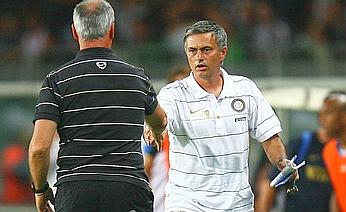 At the start of this season, most would not have foreseen the situations that the two teams find themselves in, in fact a lot would have thought that the table would make far more sense if they were to trade positions. After 15 games, the forms of each of the teams currently could not be any different.

Having claimed 32 points already this season, Ranieri’s Leicester City are starting to be considered as serious top-four contenders and seem to have duplicated the blueprint that Chelsea utilised to lift the title last season. Possessing a strong back-line, a combative midfield, talented and tricky wide-players and a clinical strike-force, the Foxes have taken the Premier League by storm this season.

Since kicking off the campaign with a 4-2 win against Sunderland, the pace of the likes of Jamie Vardy, Riyad Mahrez and Marc Albrighton have struck fear into defenders and it is this that Ranieri will look to utilise against his former employers. Securing their lofty league position with a 3-0 victory at the Liberty Stadium last weekend, the Foxes head into Monday’s clash bristling with confidence.

Whereas, Jose Mourinho’s Blues have had to endure a so far disappointing campaign following their emphatic league win last season. Surprisingly, the reigning champions are languishing down in 16th and are yet to get their (some would now say unlikely) title defence underway. In 15 league games, Mourinho’s troops have only managed to claim maximum points on four occasions and have in fact produced the worst-ever start to a season by a defending Premier League champion.

Numerous players, who were key to their successful campaign, have all underperformed this season and look incapable of reaching the top-half, let alone the top-four. Embarrassing losses to the likes of Bournemouth, Stoke City and Southampton, coupled with heavy defeats to Liverpool and Manchester City have plagued the Blues’ 2015/16 season and they look a far-cry from the dominant, imperious squad of 2014/15.

However, Ranieri and his team will have a lot to think about if they are take a positive result on Monday night. Possessing the likes of Eden Hazard, Cesc Fabregas, Diego Costa and star-man Willian (who scored yet again in the Londoners’ 2-0 victory in the Champions League on Wednesday night), Mourinho can still present plenty of problems to the Midlanders. 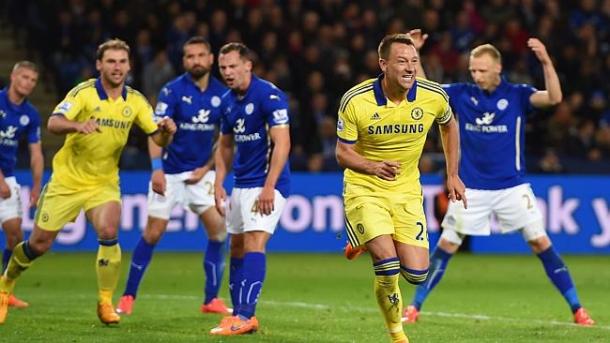 Leicester and Chelsea have experienced differing fortunes since the Blues' 3-1 win at the King Power Stadium in April (Photo: Getty)

Despite Ritchie De Laet and Matty James still missing through injury, Claudio Ranieri has a full complement of players to choose from. Fresh from scoring his maiden career hat-trick in South Wales last weekend, Riyad Mahrez will almost certainly be called upon to spearhead a rampant Foxes’ attack.

Alongside him will also be record-breaking forward Jamie Vardy. Unfortunately for the Englishman he was not able to add to his 14 Premier League strikes against the Swans so will be keen to net against the Londoners instead.

Nevertheless, one position that may be crucial for the Foxes is in the centre. Boasting the so far impressive duo of N’Golo Kante and Danny Drinkwater, Ranieri’s team will look to out-muscle a strong Chelsea midfield on Monday evening. Also, returning into contention is on-loan winger Nathan Dyer who had to sit out the clash against his parent side last weekend.

On the other hand, Mourinho’s team is a little more difficult to predict. After sitting out the Londoners’ surprising loss 1-0 to Eddie Howe’s Bournemouth last weekend, Diego Costa returned to the line-up for their mid-week clash with FC Porto in the Champions League. So, there is huge debate as to whether the Spaniard will start at the King Power Stadium with Radamel Falcao still suffering from injury.

Another man who could also be recalled to the team is skipper John Terry. After collecting a well-earned clean-sheet against Mourinho’s former club, the Englishman could well be set for his first Premier League start since the 21st of November.

However, one player who is almost guaranteed to make an appearance against the Foxes is Brazilian winger Willian. In an otherwise stuttering campaign for the Blues, the former Shaktar Donetsk man has shone and is arguably enjoying his best campaign since moving to Stamford Bridge in 2013. Already, the 27-year-old has netted seven times in all competitions and has gone a long way in compensating for the poor form of Eden Hazard.

The Warmdown: Arsenal brush aside injury-riddled Leicester City a day ago

Leicester City vs Arsenal preview:&nbsp;How to watch, kick-off time, team news, predicted lineups and ones to watch&nbsp; 3 days ago