Tottenham Hotspur have 'made contact' over the possibility of signing Juventus forward Paulo Dybala, according to reports.

The Argentinian is reportedly weighing up his options and could be open to a move, although his manager Maurizio Sarri is hoping he will play a big part for his side in the upcoming season.

There is reported interest from the likes of Bayern Munich, Manchester United and Paris Saint-Germain, whilst both Manchester City and Spurs have reportedly turned down the potential option of signing the 25-year-old.

The initial news linking Dybala with Mauricio Pochettino’s side was perhaps surprising after he has already added Jack Clarke and Tanguy Ndombele to his squad, whilst Spurs are also being heavily linked with moves for Ryan Sessegnon and Giovanni Lo Celso.

That could see Spurs spend well over £100 million on those four signings, especially if the likes of Christian Eriksen are also to stay this summer, signing Dybala would have been a shock to many.

What could Dybala offer?

There were mixed opinions on the attacker when he was linked with Spurs, he undoubtedly has the technical ability, yet many believe he has not quite hit the heights expected of him a couple of years ago.

Dybala began his career at Instituto ACC before moving to Palermo after just one season with the Argentinian side.

He spent three years there, scoring 21 goals, before moving to current club Juventus.

He has an impressive tally when playing for the Italian giants, scoring nearly 60 goals since signing in 2015, which is a good return considering he is not an out and out striker.

The experience in the Champions League also makes Dybala an attractive option, he has scored 11 goals in 35 appearances, including one against Spurs and has over 100 career goals in total.

At the age of 25, there is certainly still room for improvement and Dybala could be a big asset for the forthcoming season whoever he is playing for. 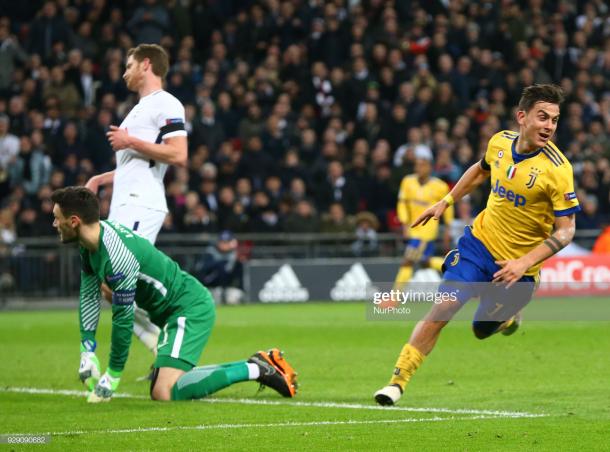 There's still plenty going on for Spurs in this window

The North London side do have plenty of forwards in their squad at the moment.

Eriksen is one of them, the Danish international explained his desire for a new challenge near the start of the window but with just a couple of weeks until the end of the window for Premier League clubs, he is still at Spurs.

Toby Alderweireld is also still at the club, his £25 million release clause only lasts until the end of Thursday, so it may turn out that he will also stay at Spurs, which would be a big boost.

The signing of Ryan Sessegnon from Fulham is expected to happen sooner rather than later, whilst a deal for Giovani Lo Celso could happen, the current issue being that Real Betis want more than Daniel Levy is willing to pay, although the player is keen on a move to the Premier League side.

The Warmdown: Spurs seal a spot in the round of 32 17 hours ago

Injuries are back at Hotspur Way 3 days ago

Jose Mourinho:&nbsp;“I am happy that we are unhappy” 6 days ago

Jose Mourinho:&nbsp;“Chelsea is just another game” 7 days ago

Vinicius Named UEL 'Player Of The Week' 7 days ago

Tottenham Hotspur vs Ludogorets preview: Team news, ones to watch, predicted lineups, how to watch 10 days ago
Restore your password
Please enter your user name or email.
Login Member or Writer Panel
Enjoy your own Customized Newspaperwith VAVEL topics' carousels!