Only one national team has ever won three major tournaments in a row, Spain. With wins at Euro 2008, the World Cup in 2010 and Euro 2012 Spain have gone into the history books and are hailed as one of the greatest national teams of all time. Four years ago in South Africa Spain battled it out with the Netherlands in an incredible final which saw Andres Iniesta break the dead lock in the 119th minute of extra time to gift La Roja their first ever World Cup. The goal was the latest winner in a World Cup final ever and will go down in history as one of the most iconic goals in the sport. Fast forward four years and the Spaniards are in Brazil hoping to do it all over again, but do they have a squad capable of winning this time round? Let’s have a look.

The three goal keepers which have been chosen to go to the World Cup are Real Madrid’s Iker Casillas, Pepe Reina of Napoli and Manchester United’s David De Gea. The rumoured first choice keeper for the tournament is Casillas the most capped player in Spain’s history and their usual captain under Del Bosque. Although he played very few La Liga games this season (2) he played throughout the Champions League and Copa Del Rey and so got his practice there, keeping a total of six clean sheets in the 13 Champions League games he played in.

Pepe Reina is the second choice keeper and is a massive player in the dressing room for Spain. He is famous for his joking antics and lifting spirits within the squad and this helps to calm others down and ease the tension within the team. However not only is he helpful off the pitch he is on it too, keeping 10 clean sheets in the 30 games he played for Napoli this season ensuring their qualification for the Champions League next season. The final goal keeping spot has gone to the youthful David De Gea who looks set to have an incredible national team career ahead of him, this tournament will be nothing but useful experience for the United man and he will only go from strength to strength. 12 clean sheets in 37 games and being voted the red devils player of the year shows just why he’s been called for La Roja.

You might look at the Spanish side and think that their midfield is the best asset but if you can look past that you will find that their defensive record is just as impressive. Spain conceded the fewest goals out of any team in the preliminary stages letting in just three throughout the course of qualification. The most likely starting back four will be Cesar Azpilicueta, Sergio Ramos, Gerard Pique and Jordi Alba, this outfit offers pace, strength, intelligence and the added bonus of a threat from set pieces. Ramos has had an incredible second half of the season and will be looking to roll that momentum into the World Cup. In his last seven games he has scored six goals which is an incredible tally for a centre back. 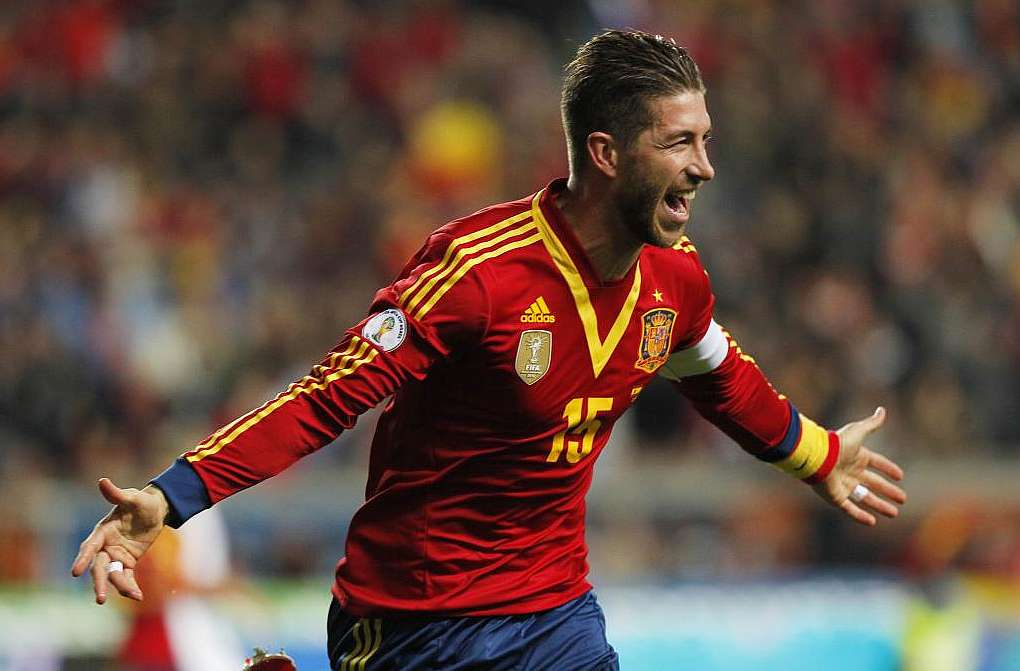 Partnering him at centre back will be Barcelona’s Pique, both ball playing centre backs complement each other well and are the impetus from defence- they get the ball rolling with strong forward runs and passes. The two full backs also have complimentary styles with Alba, the more attacking of the two, as he links up with Iniesta by constantly offering overlaps confusing the opposing team. Azpilicueta is the more diligent fullback as he offers more cover in defence whilst providing an option out wide. Raul Albiol, Juanfran and Javi Martinez are the other defenders heading to Brazil this summer and all three will be hoping to make their mark on the biggest tournament in the world. Javi Martinez is at the added advantage that he can also play as a central defensive midfielder so out of the three on the bench he should see the most playing time.

The envy of the footballing world has got be Spain’s midfield, a well drilled unit packed with some of the best talents in the world, it would be any manager’s dream to have these players at their disposal. The starting three in their 4-3-3 formation will most likely be the Barcelona contingent of Busquets, Xavi and Iniesta. Busquets will be the holding player, patrolling just in front of the back four playing the simple passes and making the crucial interceptions, his first thought when he gets the ball is to get it to Iniesta or Xavi so they can create something. The wirey framed Catalan, is hailed by his fellow team mates as one of Spain’s most important players and will be key to their chances of lifting the World Cup come the 13th July.

In front of him sit arguably the greatest ever duo in football, Xavi and Iniesta. They have won everything there is to win within the beautiful game but are still hungry for more. Xavi sits a little deeper than Iniesta and is often referred to as the general of the team, although Casillas may be the captain of the team, Xavi organises them when they are out on the field. Iniesta is the last piece to the puzzle in La Rojas midfield; the unassuming Spaniard scored the winner in the World Cup final four years ago and is the catalyst to their play. Don Andres provided 10 assists for Barcelona this season and scored three goals, one of them a crucial opener in the Clasico against Real Madrid. Many deem Iniesta to be a big game player as he’s at his best when it really matters, the World Cup final and the Semi-final - Chelsea spring to mind. But if ever there were a fact to back up this point it would be the notion that neither Spain nor Barcelona have lost when Iniesta has scored, a quite remarkable achievement.

The other midfielders for Spain are Xabi Alonso, Cesc Fabregas, Santi Cazorla and Koke. Xabi Alonso could well be in the starting XI if Del Bosque decides to play a different formation, for example he could play alongside Busquets in a 4-2-3-1 formation forming the one of the two holding players. Alternatively he could be used in the 4-3-3 formation where he would take Iniesta’s place in the middle pushing Andres up into the front three to play wide on the left. Fabregas too could see himself making the cut, playing as a false 9 in front of the midfield. This system has been employed by Del Bosque in the past most notably at Euro 2012 which was used to great effect as Spain won the tournament.

Santi Cazorla and Koke could see themselves used as substitutes regularly throughout the tournament this summer, the intense heat and humidity in Brazil will tire players out quickly so it wouldn’t be a surprise to see these two to gain lots of game time. The latter is known for his incredible engine and tenacity within the game which he will be able to use to full effect in South America this summer. In addition to having an appetite for the game Koke has scored seven times and assisted 15 times this season, for a 22 year old this is a very impressive.

Spain’s strong point has never been to score lots of goals, their World Cup win four years ago saw them break a record of scoring the least amount of goals (8) to win the competition. This time round should be no different, they have taken three out and out strikers in Fernando Torres, David Villa and Diego Costa. Torres has struggled all season again at Chelsea and has found it hard to his previous Liverpool form, a surprise inclusion for some he will be looking to prove his doubters wrong in Brazil. Villa is ageing but has still shown glimpses of his former self with Atletico this season, Spain’s all-time top goal scorer looks to have one more tournament in him, his experience should prove invaluable for Del Bosque as he knows he can always count on El Guaje.

The biggest striker this season for Spain has been Diego Costa, the former Brazilian turned Spaniard scored 35 goals for La Liga champions Atletico Madrid this season but it’s hard to say how he will perform for his nation. Playing in a new system, in an environment which will be very hostile towards him and with his recent hamstring injury the odds are stacked against him making an effect, but you can’t deny his pure goal scoring ability. The other forwards are more natural midfielders than forwards; David Silva and Juan Mata make up the final names in the squad. Mata had a troubled start to the season being benched by the new Chelsea manager Jose Mourinho, the sale of him to Manchester United ignited his World Cup dream again and he soon impressed at his new club.

David Silva has had an incredible season at Manchester City and the prospect of him linking up with Iniesta is a dream for many football fans. Merlin as he has been dubbed could be one of the stars of the tournament this summer, in 27 games Silva scored seven goals, assisted nine and created a staggering 84 chances far more than any other player in the squad. The Manchester City star could be the key to unlocking opposing sides in Brazil and should make the starting XI comfortably.

Spain have been drawn into group B which consists of opponents Netherlands, Chile and Australia. This could be considered as one of the ‘Groups of death’ due to the Netherlands and Chile both being very strong teams, Australia should be one of the teams to not get through but who advances is anyone’s guess. Spain are facing their 2010 World Cup finalist opponents again but in the group stages this time, albeit are large number of that Netherlands squad are missing this time round but it should make for a thrilling match once more. La Roja should have the quality to get past Chile too, their stern defence and superior midfield will give them the edge and Australia can be a game where they can rest key players and let the likes of Koke and Cazorla start.

Prediction: Spain should make it very far in the competition, if they can sort their goal scoring issue out they should make the final. 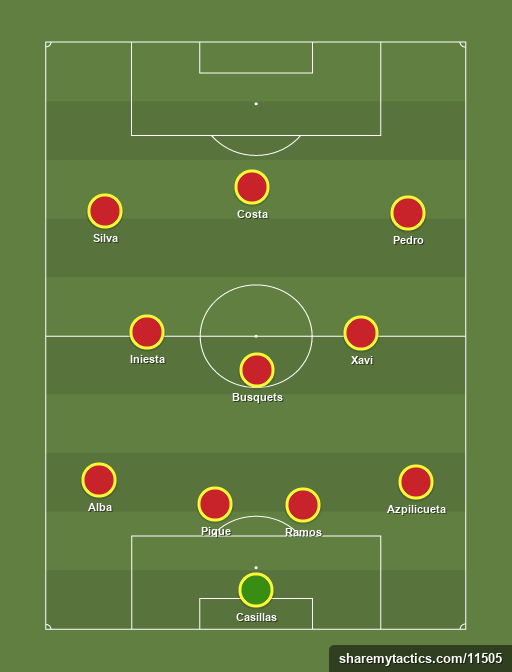