Borussia Dortmund took their chance to close the gap on Bayern Munich to just five points at the top of the Bundesliga, as they beat VfL Wolfsburg 2-1 in a crazy game at the Volkswagen Arena.

Having been winning 1-0 for the majority of the game thanks to Marco Reus' first half goal, Dortmund thought they had thrown it away as Ricardo Rodriguez scored a 90th minute penalty, only for Shinji Kagawa to strike home a winner two minutes later.

Dortmund hit the bar twice, then take a first half lead

Full in the knowledge that deadly rivals Bayern had lost earlier in the day, Dortmund came out with all guns blazing, and hit the woodwork twice in the opening stages.

First of all it was Ilkay Gundogan who struck the bar with a fine effort from a free-kick, before a most unlikely source in Sven Bender did the same from close range, both coming agonisingly close to putting Thomas Tuchel's side ahead.

Neither of them could, but one man who did was Marco Reus, capitalising on sloppy play in the midfield to make it 0-1 just past the half hour mark. Henrikh Mkhitaryan dispossesed Josuha Guilavogui, sending Reus clear on goal, and he rounded Diego Benaglio to tuck the ball into an empty net. 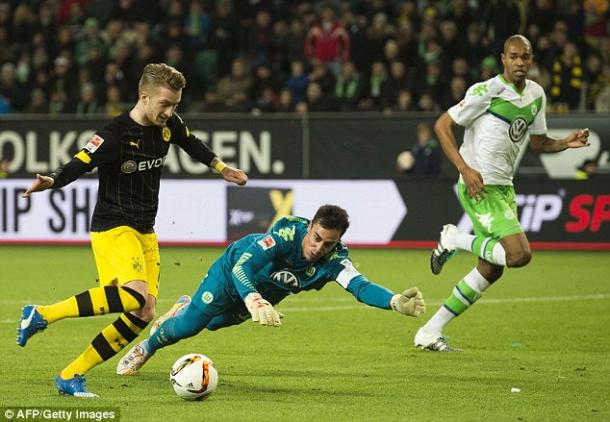 That opening goal did seem to wake the home side up, as they came back at Dortmund with renewed vigour, and it took some superb play from 'keeper Roman Burki to keep his team ahead.

Initially making a mistake in gifting the ball to Bas Dost, Burki reacted to make a quality save, and went from there. Julian Draxler was amongst those frustrated by the 'keeper, with Vierinha also denied as Dortmund held onto their lead, going into a final few minutes which proved to be extremely eventful.

The Wolves did eventually get their long awaited equaliser, coming from the penalty spot after Andre Schurrle was fouled by Piszczek. Rodriguez stepped up to the spot and made no mistake in scoring, leading everyone to believe that the game would finish 1-1.

Dortmund had other ideas though, and leapt forward in search of a winner, trying desperately to regain the lead. They did so successfully, as Mkhitaryan picked up another assist, playing in Kagawa who drilled home a goal to hand Tuchel's men a welcome three points.

They would have stayed second whatever the result, but with the gap on Bayern closed by three point, BVB will be hoping that they can mount a serious title challenge against the Bavarians.

Wolfsburg, meanwhile, now sit in fifth place following their home defeat, a point behind Hertha Berlin and Borussia Monchengladbach, the latter of which beat Bayern as both teams claimed maximum points on Saturday.

Jahn Regensburg vs Werder Bremen: How to watch, kick off time, team news, predicted lineups, and ones to watch 3 days ago

RB Leipzig vs Borussia Monchengladbach match preview: How to watch, kick-off time, team news, predicted lineups and ones to watch 6 days ago

Bundesliga Matchday 23: Three things to look out for&nbsp; 6 days ago

Werder Bremen vs Eintracht Frankfurt: How to watch, kick off time, team news, predicted lineups, and ones to watch 7 days ago

Who will replace Marco Rose at Borussia Monchengladbach? 9 days ago