It's another big game in the Bundesliga this weekend with in-form Borussia Mönchengladbach visiting Bayer Leverkusen in a clash between teams hoping to be in the Champions League places in May.

Bayer Leverkusen: Roger Schmidt's crashed out of the Champions League in midweek despite putting in an impressive performance against Barcelona. Their last league game did not go as planned as they fell 2-1 to Hertha BSC, meaning this week is crucial against a big side.

Leverkusen will likely be without Christoph Kramer because of a sickness he has been dealing with. Defender Sebastian Boenisch continues to serve his suspension and is unavailable for the next two matches. Lars Bender continues to be sidelined until late January with an ankle injury picked up in late October.

Borussia Mönchengladbach: A poor collapse against Man City on Tuesday will live long in the memory at Gladbach, but the club have been in superb form in the Bundesliga, stretching an unbeaten run to 11 games with a thrilling 3-1 win over Bayern Munich last weekend.

Ibrahima Traore and club captain Martin Stranzl may be fit for Saturday's meeting after they returned to training. Fabian Johnson hobbled off in midweek with a toe problem and is looking unlikely to feature. Patrick Herrmann and Joel Mero continue their recovery from major injuries while Andre Hahn and Alvaro Dominguez are out until the new year. 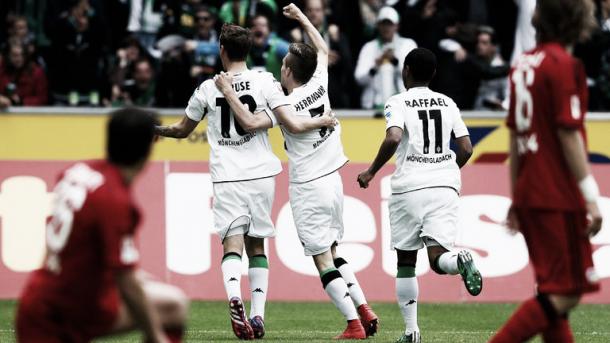 Gladbach will be hoping for a repeat performance from the last time the two sides met. (Image credit: Sky Sports)

The two meetings last season saw Borussia Mönchengladbach come out on top. A 1-1 draw in the game at the BayArena was then followed up by a 3-0 win in the reverse fixture.

The visitors are currently third in the table, unbeaten in their last 11 in the Bundesliga while Bayer Leverkusen sit in eighth with just one win in their last five in the league.

A win for the home side could see them jump up to sixth, two points behind their opponents on Saturday. André Schubert's men are currently five points ahead of Leverkusen and a win would keep them in third place.

Bayer Leverkusen - Javier Hernandez: A goal on Wednesday against Barcelona saw the Mexican striker continue his run of fantastic form and said form makes him a big threat to Gladbach's defence. Hernandez certainly has an eye for goal as we know and his awareness inside the penalty area is more than impressive.

Borussia Mönchengladbach - Raffael: The Brazilian scored against Manchester City on Tuesday and although there was a hint of fortune in the build up to the goal, he took it well as he usually does. A proven goalscorer in the Bundesliga, Raffael will cause similar problems to Hernandez and it wouldn't be a surprise to see both of them on the scoresheet.

Jahn Regensburg vs Werder Bremen: How to watch, kick off time, team news, predicted lineups, and ones to watch 13 hours ago

Bundesliga Matchday 23: Three things to look out for&nbsp; 4 days ago

Werder Bremen vs Eintracht Frankfurt: How to watch, kick off time, team news, predicted lineups, and ones to watch 4 days ago

Who will replace Marco Rose at Borussia Monchengladbach? 7 days ago