Werder Bremen and 1. FC Köln could not be separated on Saturday afternoon, as Dusan Svento's second half strike canceled out Jannik Vestergaard's early opener.

Bremen were ahead after just four minutes, with neither side really at the races when Vestergaard headed home. A corner was taken shot into the feet of Clemens Fritz, and the home captain whipped in a great ball to the six-yard box. The great Dane rose above everyone else, using his sizeable frame to guide his effort past Timo Horn.

The Billy Goats were not without chances of their own, and looked the more accomplished team in the first half. Anthony Modeste had a great chance to level matters, though he couldn't provide the finish that Yuya Osako's pass deserved. The Frenchman fired over from the edge of the area after the Japanese's slide-rule pass.

It was Bremen who would have the best opportunity before the break to score a second goal in the game. Dominique Heintz clumsily brought down Anthony Ujah inside the area, with Guido Winkmann quick to dismiss any appeals from the guilty party. Ujah stepped up from the spot and saw it brilliantly saved by Horn, low to his left. 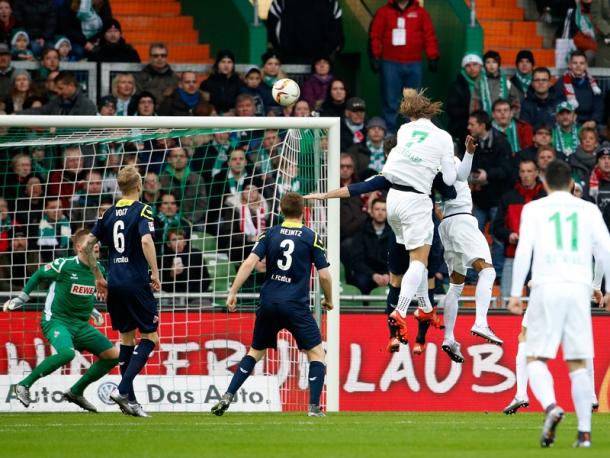 The second half was a rather drab affair, but one which Bremen were the better side in. Osako went from providing chances at one end to the other, as his header almost crept inside his own post as he attempted to clear. Horn was called into action once more, doing brilliantly well to deny Theodore Gebre Selassie from close range.

Their inability to kill the game off would come back to haunt the hosts, as Svento leveled late on. Marcel Risse's cross was pin-point and picked out Osako, though Felix Wiedwald was able to turn the ball away. There was nothing he could do with the rebound, however, as Svento slammed it home to grab a deserved equaliser.

Bundesliga Matchday 23: Three things we learned&nbsp; a day ago

Who will replace Marco Rose at Borussia Monchengladbach? 8 days ago