In a campaign filled with so much hope, so much promise, Hertha BSC fell just short of a dream season. They had climbed to third in the Bundesliga for much of the season, until when it mattered most. Hertha dropped points in their final seven matches, five of them ending in defeat. Hertha drew 0-0 with Mainz 05 in the final match of the year. And as a result, they will have to play four qualifying matches to get into the Europa League. Meanwhile, the hosts celebrated gleefully knowing that they clinched the last automatic spot.

Chances come few and far between

Mainz dominated the proceedings started early on in the contest. Karim Onisiwo worked down the left flank and eventually towards the byline inside the box. He hit a shot from a difficult angle but Rune Jarstein caught the attempt to avert any danger. Four minutes later, Valentin Stocker let fly from outside the area. However, the ball swerved away from the target, missing the target wide left.

The 24-year-old Onisiwo continued to cause problems out wide. In the 9th minute, Onisiwo found Jhon Cordoba with a great pass. The Colombian, on loan from Granada, struck a close-range shot straight at the Hertha goalkeeper. Onisiwo then had another go, this time from well outside the box, but it never troubled Jarstein.

The two sides exchanged a couple more chances towards the end of the opening half, but things remained scoreless. Julian Baumgartlinger and Salomon Kalou had opportunities from the middle of the area miss to the left of the frame of the goal.

Chances came few and far between in the opening 45 minutes. Mainz knew that a draw would be enough for the Europa League. They sat back in numbers and countered when it was necessary, but never looked threatening in the final third of the pitch.

Hertha's first opportunity of the second half came ten minutes in. The visitors had been threatening, searching for that go-ahead goal. Valentin Stocker got free inside the box and looked to have a clean look at goal. But the whistle had gone as Stocker bundled his opponent to the ground and the attack ended.

Off of a free kick three minutes later, Mainz went close to finding the breakthrough again. Cordoba was in behind the Hertha defense but blazed his header wide of the near post. In a dangerous set piece opportunity for Mainz, Christian Clemens stood over the ball. Clemens got his shot over the wall, but it also soared over the crossbar as well.

Vladimir Darida hit an audacious attempt in hopes of finding his sixth goal of the season. His right-footed strike though was stopped by the sure hands of Loris Karius.

Young Nicolas Stark got booked for the second time in the 88th minute. The 21-year-old dove in late on Giullo Donati. Stark missed the ball completely and caught the left leg in a needless challenge.

Then, Kalou could have pulled out the winner in the final minute of normal time. He battled with a Mainz defender, heading the ball into space. Kalou hit it in space, but Karius held the attempt with ease once more.

Borussia Mönchengladbach vs Arminia Bielefeld preview: How to watch, kick-off time, team news, predicted lineups and ones to watch 5 days ago

RB Leipzig vs Bayern Munich preview: How to watch, kick-off time, team news, predicted lineups and ones to watch 6 days ago

Bayern Munich vs Hertha Berlin preview: How to watch, kick-off time, team news, predicted lineups and ones to watch 20 days ago

Greuther Fürth vs Arminia Bielefeld preview: How to watch, kick-off time, team news, predicted lineups, and ones to watch a month ago

Union Berlin vs Bayer Leverkusen preview: Die Eisernen have the chance to start the campaign right note a month ago

Borussia Mönchengladbach vs Bayern Munich preview: How to watch, kick-off time, team news, predicted lineups, and ones to watch a month ago

Bayer O4 Leverkusen 2021/22 Season Preview: Die Werkself hope to be more consistent in aim for top four a month ago 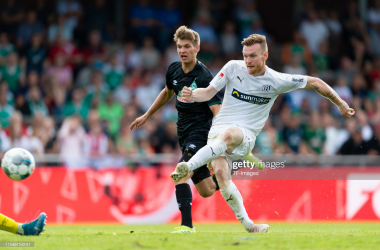 VfL Osnabrück vs Werder Bremen DFB-Pokal first-round preview: How to watch, kick-off time, predicted lineups, and ones to watch a month ago