Burnley's final preparations before they kick-off their 2017-18 campaign against champions Chelsea was abruptly halted as around 500 Hannover 96 fans ran riot at the end of the first-half in the supposed friendly.

Mee had given the hosts an advantage

The Clarets had been leading at half-time before the ugly scenes caused the game to be abandoned on police advice. Defender Ben Mee headed home a Robbie Brady free-kick five minutes before the break after Pirmin Schwegler's strong challenge on Andre Gray.

Mee pleaded with the fans to calm down alongside opponent Martin Harnik as Hannover, recently promoted to the Bundesliga, saw their fans forget about what had been unfolding on the pitch.

The German outfit had been playing well with Miiko Albornoz and Felix Klaus both testing Tom Heaton and Scott Arfield producing a goalline clearance to prevent a Felipe header from crossing the line. Klaus should also have netted when through on goal with Heaton. 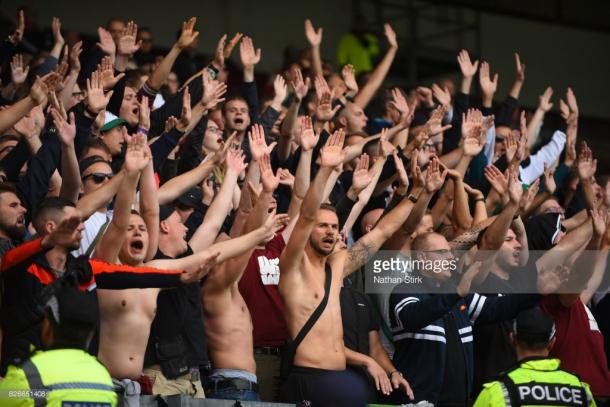 "It comes down to safety"

Yet further drama continued to resonate where the away fans were situated and Lancashire police decided the game was unsafe to continue following an extended half-time break. A statement from the force read “this decision follows violent behaviour by a group of travelling Hannover fans, who attempted to attack fans in the home stands, as well as police officers and stewards."

Burnley manager Sean Dyche agreed with the decision. He explained "it comes down to safety. The police decided to call it off and we support that. It’s important what the team do, but it’s not as important as people coming to a football match. You want safety. You don’t want people to get hurt."

Dyche added that "there's a few just a bit short" in terms of fitness and stated “we have already started the wheels in motion with the staff and will possibly have a look at getting another game in, even if it’s just for 60 minutes for players to make sure they’re topped up."

Burnley: Predictability a good thing a day ago

A reaction to Sean Dyche's comments 2 days ago

Burnley FC: How they played internationally&nbsp; 9 days ago

Disappointing window for the Clarets 16 days ago