When the transfer was completed and the deal was done, many critics were asking why Wolfsburg splashed £18million pounds to sign Belgian creative midfielder Kevin de Bruyne from Chelsea, and why The Blues let one of their brightest young prospects go.

Having many injury problems during his two-year period at Stamford Bridge, de Bruyne failed to make his mark on the Chelsea side and only featured 3 times for the first-team. The last of those, was in a 2-0 victory on the opening day of last season against Hull, where he ironically created an assist on his return from injury.

Despite this, he joined Wolfsburg in the next transfer window - and the Belgian has already done well at his new club. 3 goals and 6 assists in his first half-season at the German side, not bad for someone with something to prove.

And what about his display in the 2014 World Cup back in the summer? Sublime. He was the main orchestrator in midfield as he scored one, made 2 assists and created 16 chances in the four games. One of the best for Belgium, with Hazard drifting in and out of games. 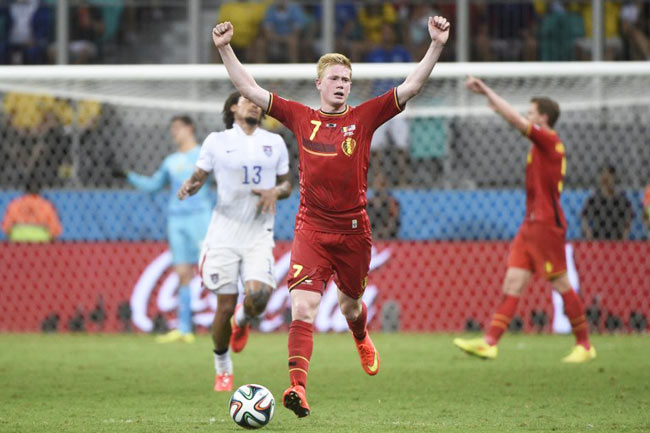 Bundesliga this campaign? 9 assists, a goal and 44 chances in eleven games so far. Flourishing isn't the word.

Wolfsburg manager Dieter Hecking had this to say: "Kevin's got that extra bit of class you need if you're going to compete at the top, he's one of those players that if you tell him to play as a No.10, he'll play out wide and vice versa. He's always looking to make space and that makes it really tough for the opposition."

Belgian maestro de Bruyne said this: "When I play football, I have fun. The first few months were hard, but I returned from the World Cup feeling good. It's going a bit better for me than it was last season, but it's the same for the other players too.

"We shouldn't dream about playing good football; it's what we have to do. Everyone's that little bit fresher now - the transition between competitions isn't always easy, but we've got a good squad. There isn't a dip in quality if the coach makes changes. It was a tough start, especially with all the injuries, but now we're having a bit more luck."

The big question that remains now, can de Bruyne fire Wolfsburg to Bundesliga glory this season ahead of Bayern?

Werder Bremen: Who is Markus Anfang, and what does his hiring mean? 11 days ago

Werder Bremen 2-4 Borussia Mönchengladbach: Bremen are relegated to the 2. Bundesliga 22 days ago

Werder Bremen vs Borussia Mönchengladbach match preview: How to watch, kick-off time, team news, predicted lineups and ones to watch 23 days ago

Augsburg vs Werder Bremen preview: How to watch, kick-off time, team news, predicted lineups, and ones to watch a month ago

Holstein Kiel 3-2 Jahn Regensburg: Mühling to the rescue a month ago
//