A single goal from Raul Bobadilla was enough for FC Augsburg to see off 1.FC Köln on matchday 15.

Anthony Modeste had a chance to give the Billy Goats a lead in the second-half, but the Frenchman's penalty was denied by Marwin Hitz after it appeared the Augsburg goalkeeper hacked away at the penalty spot.

Bobadilla then gave the visitors the lead moments later as persistence finally paid off for the Paraguayan. The 28-year-old's free-kick looped over the Köln wall, and in off Timo Horn's post.

The result leaves Köln 10th in the Bundesliga, whilst Augsburg climb out of the relegation zone.

Peter Stöger named two changes to the side that drew against, SV Darmstadt 98. Yannick Gerhardt and Yuya Osako both dropped to the bench in place of Philipp Hosiner and Simon Zoller whilst Markus Weinzierl named the same XI that drew against Champions League candidates, VfL Wolfsburg.

Köln are one of the lowest scorers in the Bundesliga this season - scoring just 15 league goals - with six of them coming from French hitman, Modeste. The 27-year-old forward had failed to net since his goal against Schalke 04 but came close to opening the scoring after just three minutes at the Müngersdorfer.

Marcel Risse almost found the net early on for the Billy Goats but were denied when Hitz dived low to his left to save the midfielder’s effort - who started the game at right-back deputising for Pawel Olkowski.

Moments later, Risse almost headed the ball in his own net, hitting the outer sanctum as Augsburg started to press for the opening goal. Caiuby came close to netting his second of the season, only for the midfielder to be denied by the ever-present Horn. 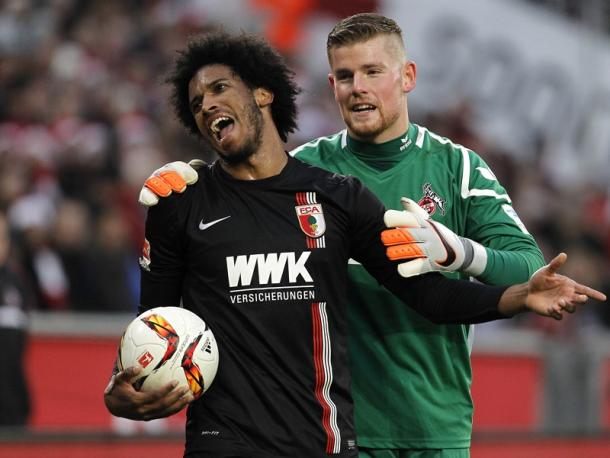 Simon Zoller’s header forced a magnificent save from Hitz a quarter of the way through the first-half but it was the visitors who were dominating the possession.

A lapse in concentration and Köln were caught on the break. Again, Horn was called into action to deny Raúl Bobadilla his third goal of the season, who was one-on-one with the Germany Under-21 international.

Köln were under-siege following a number of Augsburg attacks. In what wasn’t expected to be a busy afternoon for Horn, the German was again called upon to deny a towering header from Caiuby, who forced the 22-year-old down low.

Slowly, but surely, Köln started to keep hold of possession but again nothing came of their chances, as Augsburg again found themselves on the counter-attack, but this time it was Dominik Kohr who saw his long range effort sail over the crossbar.

Bobadilla had the last chance of the half but his effort was again kept out by Horn, who had single-handedly kept Köln in the game.

Cologne almost take the lead early in the second

Stöger came out with attacking intent in the second-half, introducing Olkowski in place of Zoller which meant that Risse could return to his favoured midfield position.

Moments after the restart, Modeste almost put the hosts in the lead, before appealing for handball at a second opportunity after an Augsburg defender blocked his shot, albeit with his chest.

Koo Ja-Cheol came close for Augsburg, who were denied by Horn for the umpteenth on Saturday afternoon, before Dominic Maroh denied Bobadilla with an impeccable block.

Köln were handed a golden opportunity to take the lead from the spot when Hosiner was pushed over in the area. Modeste took control of the situation, but the former-Hoffenheim forward slipped in his run-up, allowing Hitz to get down low to save the penalty.

Persistence finally paid off for Bobadilla who put Augsburg in the lead midway through the second-half with a neatly struck free-kick.

1. FC Köln without a win in three

The final 15 minutes involved groans from the home crowd as every decision seemed to go against Köln.

Milos Jojic had a chance to equal the scores, but it was Alexander Esswein who came closest to doubling Augsburg's lead from a set-piece.

Hosiner was almost the hero for Köln in the closing stages but the Austrian saw his effort cleared off the line.

The result now means that Modeste has failed to score in seven consecutive Bundesliga games, which is a worry for Cologne who have scored just 15 goals in 15 league games.

Augsburg's victory in Cologne gives Weinzierl a sense of achievement, after picking up a point against Wolfsburg on matchday 14.

Jahn Regensburg vs Werder Bremen: How to watch, kick off time, team news, predicted lineups, and ones to watch 2 days ago

RB Leipzig vs Borussia Monchengladbach match preview: How to watch, kick-off time, team news, predicted lineups and ones to watch 5 days ago

Bundesliga Matchday 23: Three things to look out for&nbsp; 6 days ago

Werder Bremen vs Eintracht Frankfurt: How to watch, kick off time, team news, predicted lineups, and ones to watch 6 days ago

Who will replace Marco Rose at Borussia Monchengladbach? 9 days ago