It was a thrilling week to start the 2018 season. On the women's side, it was dominated by top players from each tournament were the ones to lift up the trophy. Simona Halep and Elina Svitolina were two top-10 players who took home silverware with top-15 player Julia Goerges following suit.

For the men, it was a bit of redemption for the three men who took home the titles as they battled injuries throughout 2017 which saw dips in their rankings. Nick Kyrgios, although a top-20 player for most of the season, had an ongoing battle with a hip injury last year. He captured his first-ever title on home soil winning the Brisbane International.

In the other two ATP World Tour events, it was double delight for the French as Gilles Simon and Gael Monfils took home titles as well. Simon captured the inaugural Tata Open title, upsetting Kevin Anderson, and Monfils won the Qatar ExxonMobil Open.

Likely the biggest talking point in this week's podcast was Svitolina. Dating back to last year, she is 9-1 against top-five players and 13-5 against top-10 players. Oliver brought up the fact she's 10-2 in finals after winning Brisbane so she is comfortable against the big name players and on the big stage.

The one downside with Svitolina is that looking back at last year's Grand Slam results, she had trouble dealing with power players. Anastasia Pavlyuchenkova, Jelena Ostapenko, and Madison Keys are three big-hitters that took out the Ukrainian in majors with Halep being the only one that did not have a powerful game.

If Svitolina does come up against a big-hitter early on, she could face some trouble as she is not usually playing her attacking baseline tennis that she usually is and will be forced to play defense most of the time. If she can get by power players early on, she will definitely be one of the favorites to win any major.

The other major point of the week was the turnaround for Angelique Kerber and the continued improvement of David Goffin. Kerber and Goffin were the only two players in last week's Hopman Cup who did not drop a set in their singles matches.

Kerber already looks like she's shrugged off the horrid 2017 season she has and is being more aggressive on the baseline rather than passive. For Goffin, these are encouraging signs that he was able to back up what he did to end last season. Oliver even labeled him as the third-favorite to win the Australian Open.

Picks For The Week

Below are our picks for this week's tournaments. Unfortunately for Oliver, his finalist in Sydney already crashed out as Viktor Troicki went out in the first round.

We're both expecting a blockbuster showdown in the WTA Sydney final between Garbiñe Muguruza and Johanna Konta. We're also looking for a breakthrough week for Aryna Sabalenka in Hobart. 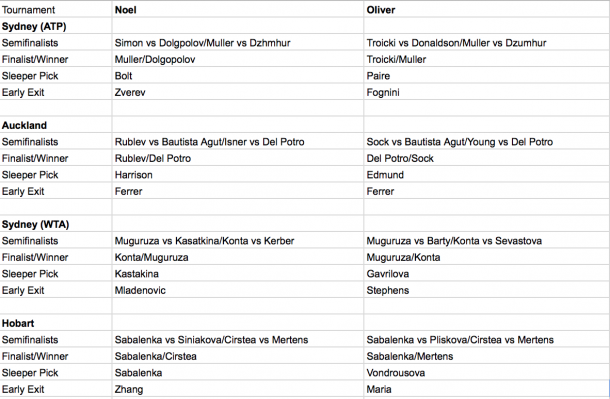