Chelsea became 6 time winners of the FA Youth Cup as goals from Izzy Brown and Tammy Abraham gave them a 5-2 aggregate win over Manchester City.

With a 3-1 deficit heading into the game, City got off to a dream start as Iheanacho finished past Collins in the 6th minute. But Izzy Brown regained Chelsea's aggregate two goal lead in the 20th minute with a headed lead before Tammy Abraham sealed the win early in the second half.

Just weeks after the U21 side won the UEFA Youth League, the U18s secured Chelsea youth dominance in Europe and England by lifting the FA Youth Cup for the second time in a row.

In correlation with the senior FA Cup, the second leg got underway only after Stamford Bridge rose to it's feet to sing the national anthem.

Chelsea, with Dominic Solanke leading the line, got the first chance as Solanke waited in the middle only for City to cut it out well.

It was the light blues' debutante who gave Jason Wilcox's side the lead and the ideal start. Coming to Stamford Bridge needing two goals to take it to extra-time, City had to get an early advantage. Angelino, one of the brightest talents on show, created space for Barker who in turn found Nemane whose ball into the box gave Kelechi Iheanacho the opportunity to poke it past Collins in goal.

The quality and experience of Isiah Brown showed as Chelsea looked to respond to conceding early. From the restart Brown, who has been in all three of the highest squads for Chelsea this season, pushed forward for his team. He led every move forward for Chelsea, combining with Jay DaSilva well at on point only for the ball to Solanke being intercepted.

Brown found space in the box at the ten minute mark but couldn't control the long ball towards him, instead forcing a corner. Tammy Abraham rose to reach a lofted cross but Adarabioyo reached higher to clear it out of the area.

Risks stayed untouched after City's opener for Chelsea but they grew back into the game as a confident City looked to expose and stretch the defence, in similar to fashion as earlier for their goal.

Chelsea's high intensity pressing gave them control of the game, gradually. Tammy Abraham was the man searched for every time they regained the ball and with pace and strength he drove past to drill crosses into the 6 yard box.

Yet with Abraham looking the most dangerous, Brown stole the show - not the first time this season - as he restored Chelsea's two goal lead to delight Roman Abramovich, watching in the stands.

Charlie Colkett knocked in a brilliant corner for Brown to steer his untidy header past the man on the line after rising above Iheanacho. 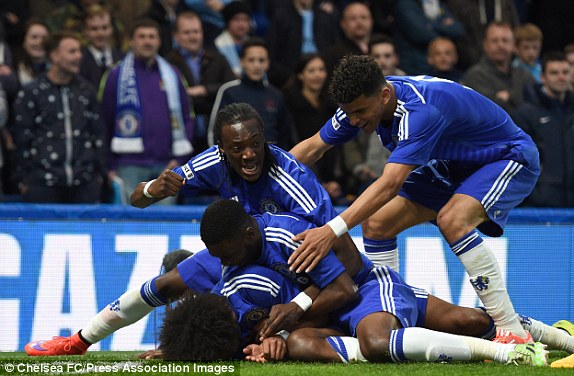 Jeremy Boga tried to extend the aggregate lead to three goals with a swerving run through the centre but his long range shot was blocked.

Chelsea's lead almost looked slender again but for Collins in goal. Pablo Maffeo's great cross towards Iheanacho was met well but Collins responded with a fantastic save, tipping it out to his left.

With away goals standing for nothing, Brown's goal returned City to needing two goals for extra time. More aggressive than in the first leg with nothing to lose, they looked unexperienced in chasing the play before letting Chelsea penetrate the space.

A long goal kick from City just minutes after the start of the second half saw Chelsea power forward with the startling pace that saw them rip City apart at the Ethiad campus in the first leg.

Dominic Solanke's combination with Izzy Brown on the left stretched City and with a wonderfully unselfish display, Solanke played in Abraham who wasn't going to pass up on the opportunity to seal the game. 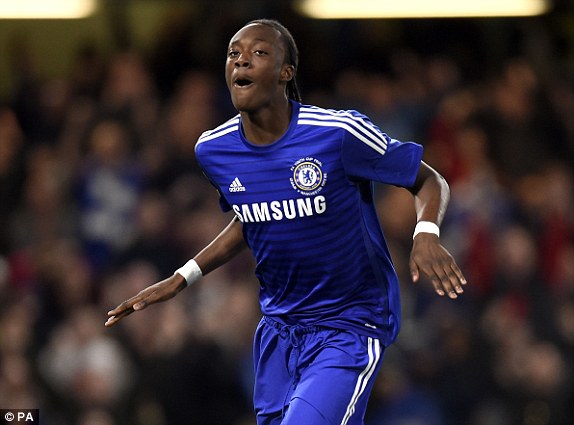 Abraham couldn't show the same unselfish play as his partner a few moments later. Holding off his opponent and producing some nice footwork he unleashed a shot into the side netting as Solanke waited in the middle.

City's response was limited but expectedly so. Angelino drilled a shot just wide from a short corner but Chelsea still dominated.

Charlie Colkett delivered a corner, just as he did for Brown's goal, for Jake Clarke-Salter to head into the stanchion, fooling some of the crowd.

Abraham received a standing ovation for his three goals over the two legs as Ruben Sammut replaced him. The scorer of the opening goal also departed soon after, Kelechi Iheanacho leaving for Isaac Buckley.

Substitutions were the shining light for a while until one of them in Buckley had the ball in the back of the net. Yet after pushing Jake Clarke-Salter, he had it ruled out.

Angelino lofted a cross to Buckley but with the towering defender in Clarke-Salter looking to clear the ball, Buckley gave him a shove, had his header saved, netted the rebound and had his celebrations cut short.

Nothing could stop Chelsea from winning their fourth FA Youth Cup in six seasons eventually. With a 3-1 win heading into the final, it was hard to foresee City coming back but Chelsea had their resolve tested early on. They came back through Izzy Brown and Tammy Abraham and thoroughly deserve their 5-2 aggregate victory after another thoroughly successful FA Youth Cup campaign.

Krasnodar 0-4 Chelsea: Magical Ziyech inspires the Blues to victory a day ago

The night that changed Petr Cech’s life forever&nbsp; 6 days ago

The Defensive Woes of Lampard's Chelsea 4 days ago

Chelsea vs Sevilla Preview: Blues look to kick off UCL campaign in style 11 days ago

Kai Havertz: The story behind the man with the £72 million price tag 13 days ago

Branislav Ivanovic: An influential figure not given the credit he deserves 13 days ago

How would "Project Big Picture" affect Chelsea 16 days ago