In a week with little surprises in the Toppserien the only movers in the table were Klepp and Røa, who capitalised on Vålerenga dropping points.

Two of the more inconsistent teams in the league this year, Klepp have steadied their ship with a calm home win over VIF, the hosts took the lead through Hege Hansen, the returning player on the scoresheet for the third time this year. With a firmer footing in the game after the break, Tameka Butt netted her sixth of the campaign with a composed finish from outside the box to the bottom corner. Despite a number of chances, as well as a glorious late one for Teigen Allen to turn home at the back post, Vålerenga failed to really trouble Oda Bogstad and the hosts ran out easy winners.

League top goalscorer, Guro Reiten needed just twelve minutes to get off of the mark at the LSK-hallen against her former team, her shot to the near post from Ryoko Takara’s pull-back too much for Kristine Nøstmo. Reiten took her tally to ten for the year – already making it her most fruitful season in the Toppserien to date – ten minutes before the break with a neat finish beyond Nøstmo after being played through by Takara.

Still struggling with numerous player departures and unable to really hit top gear this year, Trondheim struggled to cause the hosts much problems, the game firmly put to bed after Takara lashed the ball into the far side of the net from inside the box.

Victoria Ludvigsen’s goal on the stroke of half-time was all that could separate the two teams at the Nadderud as the hosts didn’t have things all their own way against lowly Sandviken. With both sides opting to punt from range there was little in the way of goal-mouth action until Ludvigsen met Elise Liane’s deft cross with a diving header in the last knockings of the first-half.

Whilst not the best football they’ve played this year, the three points keep Stabæk in touching distance of Avaldsnes, LSK snapping at their own heels, the game a step in the right direction for Sandviken who should be able to improve their points tally over the coming weeks.

Vilde Hasund gave the visitors the lead just before the half hour in Bodø, her controlled run down the eighteen-yard line capped off with a chip to the far bottom corner leaving Siiri Välimaa flat-footed. Anne-Marthe Birkeland equalised less ten minutes later taking her goal tally up to six for the year (tied with Sophie Haug, Melissa Bjånesøy and Tameka Butt). The attacker able to reach Sigrid Helbostad’s through ball and wriggle enough room from Kristine Leine before letting fly past Kirvil Odden.

Despite the parity, the traffic was mostly one-way with Line Holter crashing a header against the top of the bar at the end of the first-half before Gunhild Herregården nudged the visitors back in front at the start of the second. After Line Dverseth Danielsen tripped Katrine Winnem Jørgensen just inside of the area, Herregården buried the resulting spot kick high into the left side of the goal, Välimaa unable to get near ball despite going the right way. The Finnish ‘keeper coming up trumps later in the half to thwart the visitors as they continued to hunt for another goal.

In one of their more understated performances of the year, Avaldsnes kept themselves top of the table with a comfortable win in Troms. Although there wasn’t a huge amount of goalmouth activity, the visitors made sure to keep Megan Kufeld busy throughout, Emily Gielnik’s curler to the far side the first action to have the ‘keeper beaten. The Australian international on hand to double the advantage immediately after the break in the same fashion as she had against Klepp, knocking Francielle’s cute corner in at the near-post.

In what has been a less than glorious start to the year for Medkila with 20 goals conceded in six games and a lone point to their name, whilst they might not have offered a huge amount in attack they did look more defensively solid. Kufeld who has been constantly barraged this year had her best match of the year, well worked but with good handling and a number of hearty saves to her name in the game, though the entire team needs to start picking up steam and points.

Well on top at home, Arna took the lead less than ten minutes in through Emilie Nautnes the one to get the last touch at Elise Stenevik’s corner after Aurora Mikalsen had attempted to parry with the hosts able to keep the ball alive in the area. The lead was fast doubled as the hosts continued to overrun their visitors, Josée Nahi converting after nibbling the ball away in midfield and carrying away before completing a neat one-two with Nautnes before taking aim. Her first shot rather scuffed as Ina Gausdal block only sent the ball back to Nahi’s feet for the Ivorian international to slip it past Mikalsen at the second time of asking.

Two goals to the good inside of fifteen minutes, the hosts didn’t let up and claimed their third after the hour through Emma Fletcher the Canadian was well picked out by Lisa Naalsund as she made an overlapping run. Sanna Svensson caught short as Fletcher dashed around the back of her, before arrowing the ball into the bottom left corner.

Despite improvements from Kolbotn after the break they laboured to get going and never really troubled Alyssa Giannetti, and the loss keeps them in the bottom three. 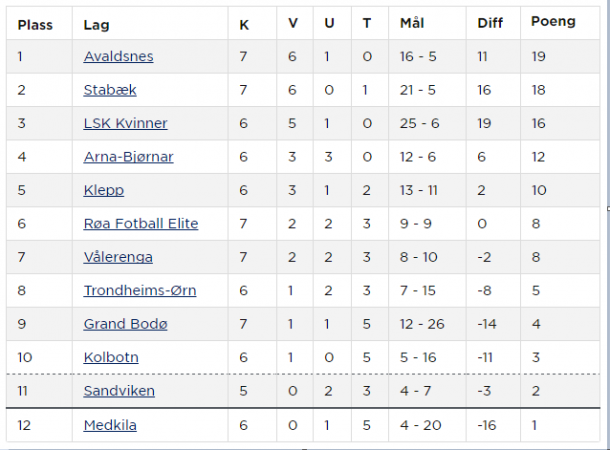 Catarina Macario is showing early signs of brilliance. Can she become a world-class centre-forward?&nbsp; 5 days ago

Chelsea vs Reading Women's Super League preview: team news, predicted line-ups, ones to watch and how to watch 5 days ago

Brighton & Hove Albion Women vs Bristol City preview: team news, predicted line-ups, ones to watch and how to watch 5 days ago

Tottenham Women vs Chelsea Women's Super League preview: Team news, predicted line-ups, ones to watch and how to watch 5 days ago

Bristol City vs Manchester United Women's Super League preview: team news, predicted line-ups, ones to watch and how to watch 12 days ago
//