Sean Dyche has made his fifth summer signing with the addition of goalkeeper Adam Legzdins for an undisclosed fee. The journeyman arrives in the wake of Paul Robinson's retirement and Dyche's desire to bolster his cover for Tom Heaton.

Burnley become Legzdins 12th club in a career that has seen him play in every league from the Championship down to the Conference North. Yet this will be the English-born Latvian's first taste of dining at the helm of English football if he can dethrone England international Heaton.

Legzdins arrives at Turf Moor after making only 13 appearances for Birmingham City in the Championship last season. The shot-stopper returned to St Andrew's in 2015 after coming through their Academy ranks.

Hard graft to the top

The goalkeeper, who has signed a three-year deal with the Clarets, was shipped out to no less than five clubs as a youngster on loan from the Blues but failed to establish himself for Alfreton Town, Oldham Athletic or Macclesfield Town.

However, a strong spell for Conference side Halifax Town attracted the attention of League One Crewe Alexandra, though he was immediately loaned out to Weymouth. Following Crewe's relegation to the lowest tier of the Football League, Legzdins made just nine appearances in 2009-10. 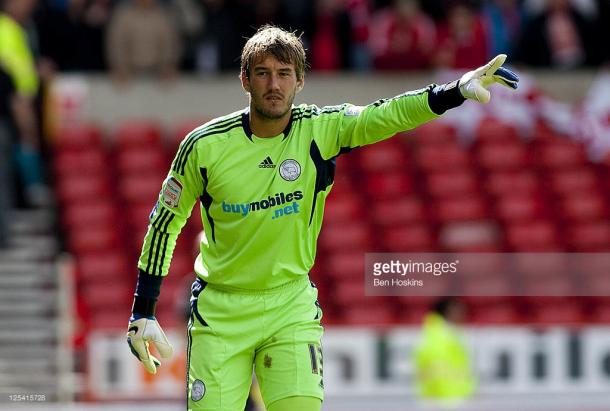 Making a name for himself at Burton and Derby

Championship side Derby County snapped up Legzdins where he was utilised as a backup for young English goalkeeper Frank Fielding. After a season predominantly on the sidelines, an injury to Fielding in the 2012-13 campaign allowed Legzdins to formulate 30 consecutive appearances.

The signing of Lee Grant all but curtailed his Rams' career and Legzdins was signed by Leyton Orient for the 2014-15 season. He made 13 appearances for the East London club before returning to Birmingham for a three-year spell until Burnley came calling.

Clarets' goalkeeping coach Billy Mercer is delighted with the new addition and the competition he can provide for Heaton and Nick Pope. He stated, "as I’ve said to all of them ‘we don’t do one, two, three’ and no-one is guaranteed a place in any position at the football club, so it’s a healthy competition for places and one I’m looking forward to seeing."

Mercer added “Adam is a good age, he’s got a lot of games behind him, he’s very athletic, he’s a big lad with a lot of presence and one who will add to the group. “He’s hungry and very professional, which fits what we’re about here. He will push and work his socks off to challenge."

Legzdins himself suggested "I’m here to excel and I want to push them and help improve the goalkeeper department. I think I can add a lot of things which can help us all kick on and I’m looking forward to learning from Billy and the other two goalkeepers."

He is also relishing the competition for places. “To be in an environment where there is healthy competition can only help us all moving forward and I want to achieve as much as possible."

Young goalkeeper Conor Mitchell has joined Chester City on the back of Legzdins' arrival.

A reaction to Sean Dyche's comments 5 days ago

Burnley FC: How they played internationally&nbsp; 12 days ago

Disappointing window for the Clarets 19 days ago