Right, before we kick this one off, we'd better get one thing sorted out.

We know Kirsten doesn't begin with a U, as has been the rule for the rest of this series. We tried (like, very hard) to find somebody applicable for the letter U, and it proved an onerous task.

World Cup squads, top scorers lists, most appearances lists and searches through random club histories fell by the wayside and an executive decision was made. Ulf would have to do.

It is an excellent name, after all, almost cartoonish in how satisfyingly German it is.

It's the sort of noise you'd make as you hit the deck as Per Mertesacker clatters through you, and the sort of name you could imagine being given to a wise grandfather figure in a feel-good film about a shy eleven-year-old from Gelsenkirchen who saves his family home from demolition by beating a team of builders at a game of five-a-side. Or something like that.

As wonderfully Teutonic as he might be, Kirsten's career coincided with an era where being German wasn't a nailed-down concept, leading to him sharing his 100 caps between two nations. The first 49 came for East Germany, with 51 following for Germany after reunification in 1990. 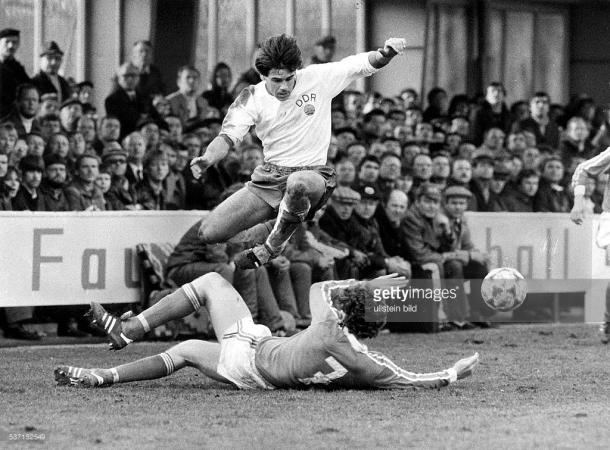 Born in the Saxon town of Riesa, Kirsten spent the first seven years of his professional career playing for Dynamo Dresden in the East German Oberliga, scoring goals around the GDR and winning a pair each of league and cup titles.

With 57 goals in 154 games for Dynamo, Kirsten had a style of play all his own. Small but stocky and sure-footed, he was infamously difficult to knock off the ball, perhaps reminiscent of Sergio Agüero in this respect.

Holding defenders off the ball inside the area, he had a knack for sharp turn-and-finishes, turning danger into goals in the blink of an eye. He was also surprisingly proficient in the air, making up for his 5'7" frame with an enthusiasm and determination to throw himself at the ball despite the presence of much larger defenders.

His 49 East German caps brought with them 14 goals, including a symbolic hat-trick against the GDR's traditional ideological binaries, the USA - though this came after the fall of the Berlin wall in 1989. 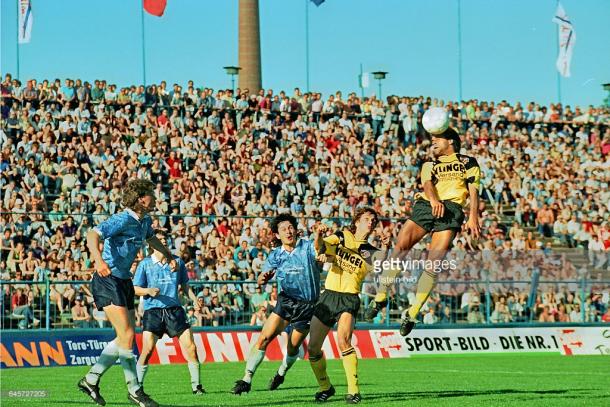 With reunification the following year came opportunity for the professional footballers in the East, and Kirsten was one of the first to make the switch to the Bundesliga.

He moved to Bayer Leverkusen in his prime at 25, and within two years had earned his debut for Berti Vogts' Germany. This came, fittingly, in Dresden in a friendly against Mexico, but he didn't find the net in a one-all draw.

His first goal came early in 1993 in another friendly, this time against Ghana, but all the time he was scoring goals for Bayer, where he became a firm fans' favourite.

He remained at the club for the remainder of his career, and his 182 goals see him at number six in the Bundesliga's all-time top scorers list - Gerd Müller is the only other player to break the top ten playing for a single club.

The art of the poacher

Though not especially flashy, his highlight reels are a joy to watch, showcasing all the skills of an apex penalty-box predator. He had the knack for capitalising on defensive mistakes, finding the corners of the net and, perhaps most importantly, absolutely leathering the ball past goalkeepers when necessary.

He did this for Germany too, adding 20 goals but suffering the German ignominy of never scoring against England - though he had only one attempt, in Charleroi at Euro 2000.

Suffering at the hands of the Bayern-Dortmund duopoly in the Bundesliga in the 1990s and early 2000s, Kirsten's only title with Bayer was the 1993 DFB-Pokal, though he did play in the 2002 Champions League final as Bayer's season unravelled - the league, German Cup, and Champions League were all lost in the final weeks of the 2001/02 campaign.

He called time on his career at the end of the following season, leaving Bundesliga defences to breathe collective sighs of relief around the country.

The man they called Der Schwatte (local dialect for 'the Black One') had been a continuous source of goals and excellence across two eras of German football, cementing his status as a Bayer Leverkusen icon.

This article is part of a regular series, 'The A-Z of forgotten football heroes'. Catch up on the last entry, on one of the great unfulfilled talents of the Premier League era, here.

Crystal Palace vs Manchester United preview: How to watch, kick-off time, team news, predicted line-ups and ones to watch. 17 hours ago

York City 2-0 Boston United: City Promoted Back To The National League 16 hours ago

The Warmdown: Nottingham Forest are going to Wembley 20 hours ago

Sunderland vs Wycombe Wanderers preview: How to watch, team news, predicted line-ups, kick-off time and ones to watch 21 hours ago

Brentford vs Leeds United preview: How to watch, kick-off time, team news, predicted lineups, ones to watch a day ago