In-form Arsenal welcomed Brentford to the Emirates for the first time in the Bees history, the visitors had not won in their last four games but shocked the league on opening day when they won the reverse fixture 2-0.

Since then, the Gunners are a different team though, really establishing themselves in the top four race and putting together a good run of form, the Gunners will be hoping to fire themselves even further ahead in the table.

A Frustrating First Half

A dominant spell of possession in the first half frustrated the hosts, with sixteen efforts on goal, but only 2 on target with the Brentford defence putting in a superb effort to deny them.

Alexandre Lacazette found the net in the 12th minute, however a VAR check ruled the goal out for offside, this would just be the beginning of the hosts woes on the day when it came to VAR

A few minutes later Bukayo Saka cut in from the wing beating his man before going down from Pinnock's challenge, however the appeals for a penalty were waved away.

A patient build up move in the 37th minute saw Tierney's cross nodded away by the Brentford defence before Ben White's volley was saved well by keeper David Raya.

Not long after Arsenal created patiently again with Cedric's effort at goal  blocked by the arm of Wissa but the VAR check, much to the frustration of Arsenal fans again, deemed it not worthy of a penalty to be given.

Arsenal finally found their breakthrough with Lacazette finding Emile Smith-Rowe on the left side, whose quick feet were too much for his man and he placed a beautiful curling shot into the bottom corner of the net.

A well crafted move by Arsenal with Lacazette struggling to find his touch again in this game left him unable to play Smith-Rowe through, Xhaka found Partey in some space who fired his effort at goal from distance but saved comfortably by the keeper

Late in the game, Arsenal were still in control of the tempo and Odegaard surged forward but Raya came out on top in the one on one situation, some fantastic defending denied Pepe an easy tap in to an empty net.

With Brentford still pushing forward, they had the ball stripped from them again, and this time Arsenal made them pay for it with Partey's pass through to Bukayo Saka who was able to find the back of the net with a fantastic effort.

Into stoppage time, Norgaard had the ball in the net for Brentford, the on pitch decision was to disallow the goal with the flag up, Norgaard well aware turns away without celebrating but VAR overturned the decision to lead to a nervy finish for today's hosts.

Arsenal were dominant in all areas of the pitch on the day until stoppage time when Norgaard scored, a nervy finish as soon as they kicked off, being saved by the flag going up as Brentford push up again following the kick off.

The disappointment will come from their corner delivery and finishing, the first half saw them fire a league record 16 shots at goal but only two of those on target, some fine finishing from Bukayo Saka and Emile Smith-Rowe on the day was the difference, but Arsenal also won a large number of corners and not only did they fail to convert from them, they never really caused any danger from them either. The performance just highlights the issues that have been brought up with a striker not being signed in the January window.

Aaron Ramsdale will be disappointed to not come away with another clean sheet to his record this season, but he really had very little to do, he was never really tested this game, with Brentford posing very little threat at all, and his only real touches on the ball were gathering crosses as opposed to saving shots.

Alexandre Lacazette's performances may be cause for concern, the striker was fantastic today in most areas of the pitch, his finishing is the main issue, he did score the disallowed goal early in the game, however, there were occasions where his touch was letting him down such as the opportunity to play Smith-Rowe through for a chance at his second goal. Regardless of these facts, he was still fantastic today, but the Frenchman needs to start finding the net more.

Man Of The Match

There were quite a few names who could have took this award today, Odegaard was fantastic in the first half but quietened down in the second and he really should have got on the scoresheet, as well as Saka's performance throughout.

As well as the creative performances from the team, the midfield pairing of Granit Xhaka and Thomas Partey was outstanding today, they controlled the midfield and Partey showcase his ball winning ability, and Arsenal will be hoping he can repeat that kind of performance.

However, the award has to go to Emile Smith-Rowe today, his ability on the ball was outstanding today and far too much for the Brentford defenders to deal with as he showed beating his man and placing the ball into the net for his 10th goal of the season. His hard work continued on the ball until he was replaced by Nicolas Pépé in  the 75th minute.

The youngster quickly stepped up yet again for the Gunners when needed replacing the suspended Gabriel Martinelli, who also was stepping up for the team when needed also providing a number of goals and winning the player of the month award back in December, Emile Smith-Rowe was exactly what the hosts needed today. 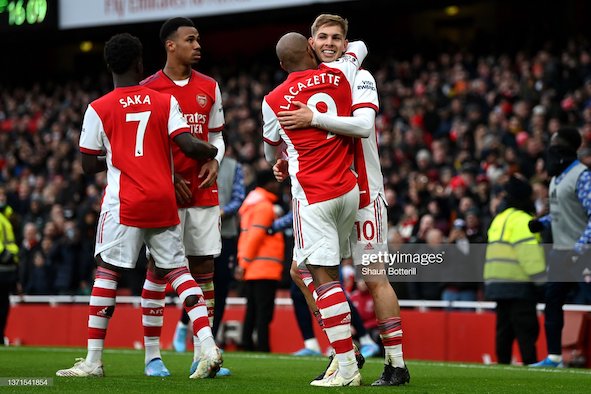