After boss Nick Cushing's departure following Manchester City's 2-1 win over Arsenal last weekend, assistant Alan Mahon will make the step up at Rush Green on Sunday to be in the dugout for his first professional match across both the men's and women's games. Unlike Cushing, the interim boss has a wealth of football experience under his belt (albeit not from a managerial perspective): he notched up 313 appearances across his career which was mainly focused in England. Weirdly, he played a single game for Sporting in Portugal before being shipped out on loan to Blackburn Rovers on a deal which he chose to make permanent after it's culmination.

West Ham, on the other hand, will want to quickly forget their misfortunes from last week's 8-0 drubbing at the hands of title-chasers Chelsea. City have had scorelines that have fallen in their favour every time that they've played West Ham in the league (5-0, 3-1, and 7-1), making it look like the Irons' main objective come Sunday will purely be damage limitation.

The German international could provide the best goal threat up top for a City side who do not lack in firepower. In their recent encounter against Arsenal, Bremer had the highest level of expected goals at 0.44, despite not netting throughout the game. Coupled up with the lethal wing play of youngster Lauren Hemp, she spearheads the attack and will most definitely cause worries for West Ham's defence.

Although it is difficult to predict anything but a loss for the Irons in Sunday's fixture, Kenza Dali could prove troubling in the centre of the park. Since signing in the summer from France, Dali provides a new creative flare at Rush Green. One look at her passing map shows exactly the type of player that she is, her efforts are mainly focused in the middle of the park with a handful of balls going forward and her pass accuracy is one of the best in her team.

There is without a doubt no better creative player at Alan Mahon's disposal than the Manchester-born midfielder. Against Arsenal, Walsh had an impeccable pass accuracy of 93.2% across 44 balls, and provided a sublime assist for Lauren Hemp's second-half header. With City's attack being as versatile as it is, Walsh acts in a role not too dissimilar to that which is seen played by Kevin de Bruyne in the men's game and provides excellent link-up play between the defence and attack whilst dominating the centre of the pitch. 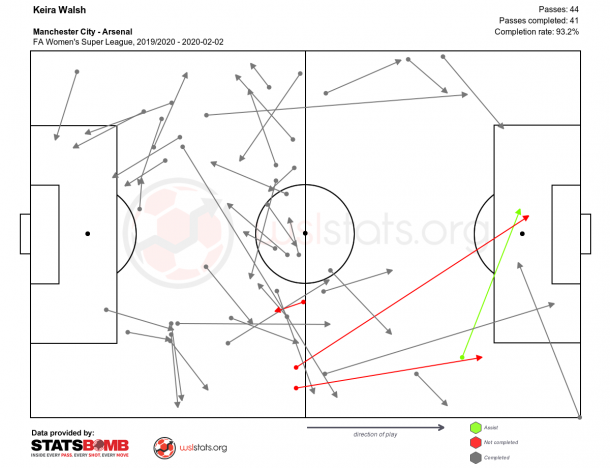 Despite worries over a possible departure in the summer, all has now changed, and this week Walsh put pen to paper on a deal that will keep her at the Academy Stadium until the end of the 2022/23 campaign.

The last time that the two faced in the WSL was back in September as part of the FA's 'Women's Football Weekend'. The blues ran out 5-0 victors in front of a bumper crowd at the Academy Stadium, with forward Georgia Stanway picking up both a brace and a red card in the match. Here are the highlight's from November's tie:

The biggest game without a doubt last year for the Irons, the two played out a brilliant game in front of over 43,000 fans at Wembley Stadium in the Women's FA Cup final. On the day, City's professionality and work rate was evident, with all three of their goals coming in the second half. However, it was a fine culmination of the work that Matt Beard's side had put in over the entire campaign, and was a major success for a team who were in their first season in the top flight.

What both sides have said

Ex-Manchester City midfielder Tessel Middag spoke to whufc.com this week about how she thinks the side have to work hard and stay positive after their 8-0 hammering at the hands of Chelsea:

“It’s hard to find the words to describe this loss,” the 27-year-old said “We conceded goals quite early in the game, so it felt like we were out of the match quite early on.

“We said to each other at half-time ‘it’s 3-0 but we know what can happen in football’. If we could have scored the next goal, then who knows what could have happened. But as soon as they got the fourth that was the game lost for us.

“It was really frustrating and disappointing. We want to play better for ourselves as individuals, for the team and, of course, for the fans. We want to show the supporters even more so they can be proud of us. It was very disappointing because we set ourselves very high goals at the beginning of the season and, as long as we’re not living up to those expectations we have of ourselves, it’s hard to take.”

Although she has had a season that has been marred through injury, young forward Georgia Stanway told mancity.com this week about how she is targeting a strong end to the season for the blues:

“For me personally, this season has been a bit rocky,” said Stanway.

“At the start of the season, I was unlucky to get injured. I was in and out if the team.

“When you’re injured, it knocks you back a bit and other players have been in form. I have absolutely nothing to complain about because people have been playing out of their skin, putting the ball in the back of the net.

“I can only sit back and admire that!