Everton booked their place in the FA Cup Semi-Final’s after edging past big-spending Chelsea 2-1 at Goodison Park.

Chelsea refused to let the home side settle into the tie and their relentless pressure was rewarded with a goal inside five minutes as world-record signing Pernille Harder drove down the right and squared a ball to Erin Cuthbert who drilled her effort hard and low past Sandy MacIver in the Everton net.

The Toffees really struggled in the opening stages of the game in beating the Chelsea press but after multiple failed attempts, a cross field ball found an on-rushing Hayley Raso but the Australian international could only manage to drag her effort wide of the Chelsea post.

The early pressure from the visitors meant their energy levels dwindled towards the end of the first half and the patient game plan from Everton paid off five minutes from the interval as a superb overlapping run from Ingrid Moe Wold found skipper Lucy Graham who headed the home side level.

Just after the hour mark the Blues scored again and this time it was substitute Valerie Gauvin who got her name on the scoresheet following a superb cross from Hayley Raso.  Gauvin was prolific back in her native France, netting 50 goals in 90 games for Montpellier over a 6-year-period and now she has two in two for the Toffees.

Everton have the more favourable semi-final fixture, facing the winner of the 2pm kick-off between Brighton & Hove Albion Women and Birmingham City Women.

Smart game plan from the Toffees

Willie Kirk’s side were made to wait patiently for their few chances this afternoon as Chelsea applied constant pressure for the first half hour of the tie.

As with any team who opts for a ‘gegenpress’ style of play, there will come a time in the game where energy levels are low and at that precise moment is when the opposition need to strike and that’s exactly what the Blues did in the first half.

As far as tacticians go, Kirk is right up there as one of the best in the WSL and after assembling a solid side in the off-season, the Toffees chances of playing European football come next year has increased significantly.

Today's performance against the champions was really disciplined and provided the league with a good blue print of how to play against Hayes' side. The 22-year-old was superb in net for Everton and if it were not for her heroics in the second half the Toffees wouldn’t have come away with the win today.

MacIver did her England and Olympic hopes no harm whatsoever and ticked every box manager Philip Neville, who was in attendance at Goodison, would have wanted.

Her distribution was second to none and in the big moment, when her side needed her the most, she turned up and showcased cat-like reflexes to keep her side in the lead. Willie Kirk’s side will be hoping to make it three wins from three in the WSL next weekend as they travel to newly promoted Aston Villa.

The Claret & Blue Army’s last picked up three points in the topflight some 16 years ago and the Toffees will be wanting to assert their dominance on the fixture as continue their title-chasing form. 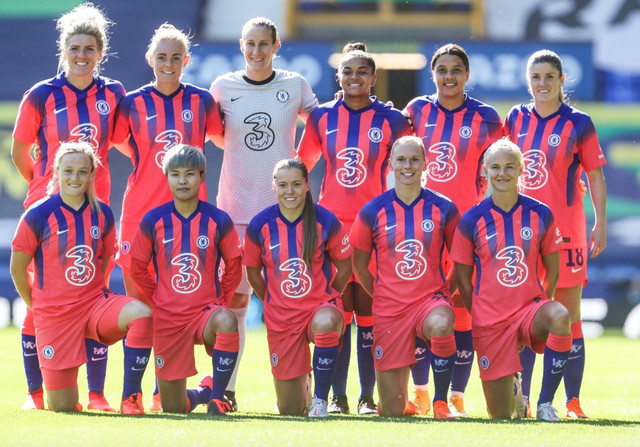 Chelsea will also make the trip to the Midlands next weekend as they face off against Carla Ward’s Birmingham City, who much like their city rivals are winless this term.

The Blues where in fine goalscoring form in their last league game, putting 9 past a frail Bristol City outfit.

As their rivals continue to record victory after victory in the WSL, there really is no room for error for Emma Hayes’ side as they look to make it back-to-back league titles for the first time in the club’s history.

"We Rise with More Eyes" - The Football Revolution 7 months ago