Misfiring. Wasteful. These are just some of the accusations that have been thrown at Spain during the opening games of Euro 2020, and rightly so to an extent. So what better way for Luis Enrique’s side to quieten the discontent by scoring five in the biggest win of the tournament so far.

This emphatic beating of a poor Slovakia side sent Spain into the knockout stages with room to spare where a meeting with Croatia awaits them. Enrique’s side can rest assured, however, that that game will be tougher than this one. Slovakia gifted Spain so much at the Estadio La Cartuja that only a bow was missing.

Two goalkeeping howlers, a poor defensive pass, a second-half wilt and an insipid attacking display all featured for Stefan Tarkovic’s team, who made this young Spain side look like they were brimming with confidence and absolute world-beaters.

That was not the case and Enrique will be fully aware that as welcome as this performance and result are, his team struck lucky with their opposition in what was a pivotal game for the Iberians. Improvements are still needed.

Enrique needed a performance just as much as a result from his Spain team after two below-par draws with Poland and Sweden. They may have not needed a victory to progress, had results gone their way elsewhere, but this was a game that had to be used to show an improvement, especially in front of goal.

It didn’t start too well with a succession of reasonable chances in the first half-hour all being missed. Pablo Sarabia, Pedri and Alvaro Morata all passed up good openings. As normal, Spain were seeing plenty of the ball in midfield but it was in Slovakia’s area that the first major incident of the game occurred.

Jakub Hromada attempted to clear the ball but instead missed it and went through the back of Koke’s calf. Morata, the goalscorer of Spain’s only goal in the tournament to that point, stepped up to take the penalty but his lack of confidence showed when he struck his under-powered shot too close to Martin Dubravka who saved. That was Spain’s fifth successive squandered spot-kick.

Moments later, Morata brought another save out of the Slovakia goalkeeper but it all went downhill for Dubravka from there. Sarabia took aim from 25 yards and his effort struck the crossbar, bounding high and then beginning to drop. It was then that Dubravka tried to push the ball to safety but only managed in palming it into his own net. A weak wrist? Sun in his eyes? Either way, it was comical and dreadful in equal measure.

To add to Slovakia’s misery, another Dubravka aberration saw Spain double the lead just before the break. Koke’s corner was half-cleared and Pedri, on the edge of the area, lifted a ball over the Slovakia defence to Gerard Moreno. The Slovak goalkeeper went to challenge Moreno but got caught in no-man’s land, allowing the Spain forward to flick the ball over him to Aymeric Laporte who rose to head in for his first Spain goal.

Spain mustn’t have believed their luck: when they needed a win, they were literally handed one. Slovakia had been abysmal, Dubravka’s errors aside. They rarely kept the ball for more than a few seconds and although they came out after the interval with a bit more about them, they were soon put in their place once more.

A well-worked passing move from right to left, stretching the apron of the pitch, found Jordi Alba on the left side. His low cross was played in front of Slovakia’s backline and Sarabia, who hadn’t been marked closely enough, pulled away to finish first time with his left foot. That was more like the Spanish football we know.

There was now a worry that the rising goal difference would prevent a third place finish being enough for Slovakia. Conceding two more didn’t help their cause. Ferran Torres, new from the substitutes bench, back-heeled a low Sarabia cross in for the fourth. Then, Milan Skriniar scooped a clearance from a Pau Torres header into his own goal when it was surely easier not to. Spain didn’t care.

This was the biggest mismatch of the tournament so far and the scoreline said as much. Spain move on to Copenhagen to face Croatia, while Slovakia head home with a whimper.

Preview: Eintracht Frankfurt vs Fenerbahçe a day ago

Chelsea vs Zenit St Petersburg preview: How to watch, kick-off time, team news, predicted lineups and ones to watch 4 days ago

Borussia Mönchengladbach vs Arminia Bielefeld preview: How to watch, kick-off time, team news, predicted lineups and ones to watch 5 days ago

RB Leipzig vs Bayern Munich preview: How to watch, kick-off time, team news, predicted lineups and ones to watch 6 days ago 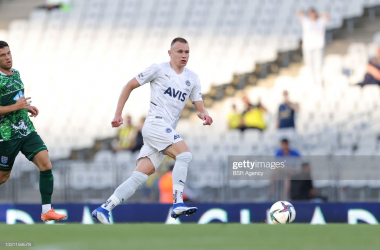