WrestleMania 33 featured seven hours of wrestling, a long day for those attending but a show full of memories and emotion.

A number of top matches were featured throughout the night and a number of 'Mania moments were established but what Grade did the Orlando show earn? 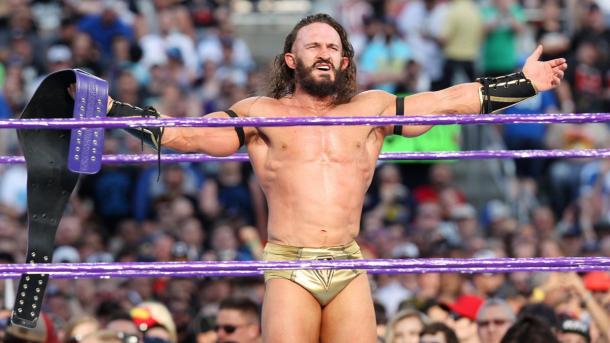 The first match on the show featured two of the top professional wrestlers in the company in Austin Aries and Neville(c) and the two cruiserweights set the benchmark for the rest of the show.

Both men had been feuding for the past month and they got the blood pumping as the fans became to fill out the Camping World stadium.

Ultimately, Neville retained via the red arrow, a difficult opener but one that cemented the two stars of the cruiserweights in a good time duration.

Next up was the 30-man over the top Andre the Giant Battle royal (That was a mouthful) the early eliminations of Braun Strowman and The Big Show were met with boos, and many watching at home shared their views.

Ultimately it came down to NXT rookie Killain Dain (formally Big Damo), Jinder Mahal and Mojo Rawley, a strange trio but what happened next was even more bizarre.

New England Patriot star Rob Gronkowski hopped over the barrier after a confrontation with Mahal and leapt into the ring tackle the former 3MB member, before Rawley picked up the victory.

The former Hype Bros member was one of the least likely candidates to pick up the win but it was his WrestleMania moment and made 'Mania all about those special moments once again.

Last on the pre-show was possibly the most disappointing match of the show as Dean Ambrose (c) defended his Intercontinental Championship against Baron Corbin, culminating their long feud in truly pointless fashion.

Both men started well but seemed restrained and as quickly as the match became interesting, the Lunatic Fringe hit the dirty deeds to retain his title.

The mutual pushes of both the Lone Wolf and Strowman ended in sudden fashion, with no real follow up storyline, although they will have plenty to feel aggrieved about on Monday Night Raw and SmackDown Live respectively.

While the pre-live opened up a world of fun, there is nothing like the main show of WrestleMania and the opening act may have been the best match of the night.

Shane McMahon versus AJ Styles raised many eyebrows when first announced but in fairness to the veteran he put on a, you guessed it, phenomenal performance. 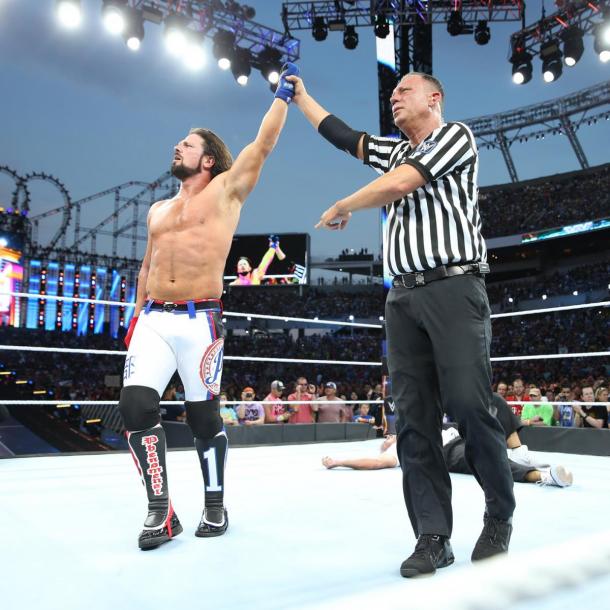 Ultimately it would be the former WWE Champion picking up the well deserved victory but the SmackDown Live Commissioner held his own against possibly the best in the world, a surreal statement to utter in 2017.

Kevin Owens versus Chris Jericho was up next, and while the storyline between these two could possibly be the best in history, their match itself was rather restrained despite an explosive start.

The Prize Fighter reigned victorious on the night to pick up the US Title and mark the first championship change on the night, Y2J bowed out in glory as he is set to embark on his next Fozzy tour, but the Ayotollah of Rock and Rolla will return. 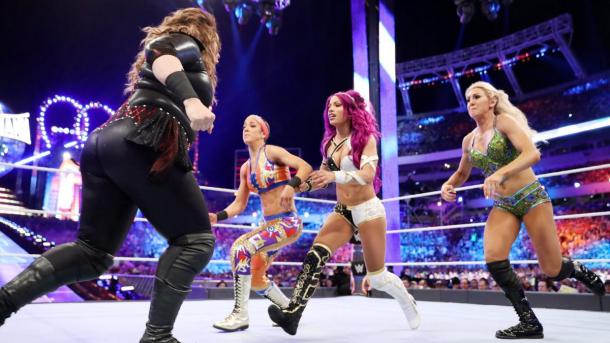 Next up was the unfortunate downfall in such a stacked and chocker-block card as Bayley (c) defended her championship against Charlotte, Sasha Banks and Nia Jax in a fatal-four-way match.

The Huggable One retained her gold but in no amazing fashion, it may have been in honour of Macho Man Randy Savage via an elbow drop but it came out of nowhere and left a sour taste in many's mouths.

However, the special guest hosts for the night The New Day produced possibly the greatest 'Mania moment of all time as they announced that there would be a fourth participant in the match. 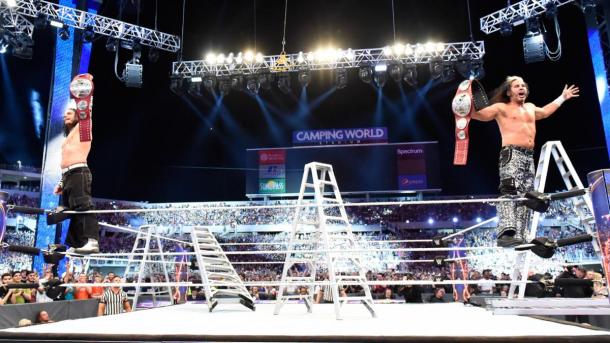 The Hardy Boyz came out to a standing ovation as 75,000 fans rose to their feet in appreciation, and it would be the two veterans standing tall as they claimed tag-team gold in WWE for the eighth time in history.

Sandwiched between the good filling was another sour piece of bread as John Cena & Nikki Bella took on The Miz & Maryse in what was surprisingly one of the most highly anticipated matches on the entire card.

It did not live up to expectations. Despite fans chanting for the A-lister it would be the Face and the Fearless Ones picking up the victory but what followed after was the real talking point. 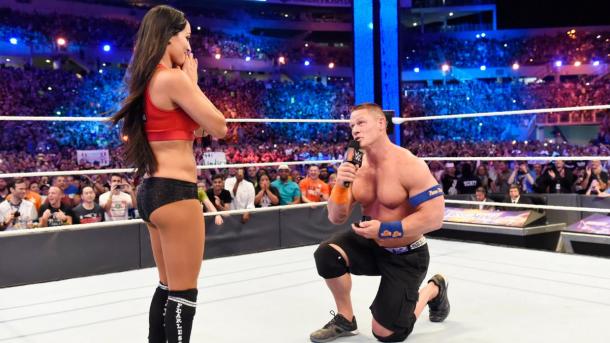 Cena bent down his knee and asked for Nikki's hand in marriage, a long running storyline on Total Divas/Bellas and the two embraced in a heartwarming act of love.

Seth Rollins looked like he bitten off more than he could chew regarding his unsanctioned match as Triple H made his typical showcase entrance to the ring via a motorbike and police escort.

The Game with Stephanie McMahon ringside looked to have the Architect's number but the former Shield member could not be put to rest and hit the pedigree on its creator to pick up the pinfall and destroy the destroyer.

A rather tame affair to what could have been, which was the story for many matches throughout the night, none more so than what followed. 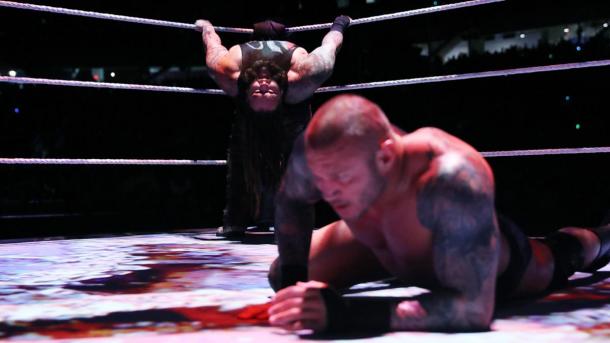 Bray Wyatt (c) and Randy Orton had been playing mind-games all throughout their feud and it reached never before seen heights during their bout in Orlando with the WWE title on the line.

Orton was in the middle of the ring and maggots, worms and crickets were portrayed onto the canvas sparking a series of gasps from the audience.

No real in-ring surprises helped this match become anything more than a magician's sideshow and the Viper easily defeated his former leader to reign victorious and add another piece of gold to his collection. 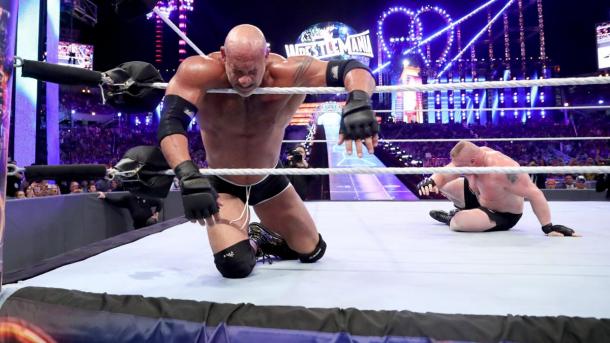 Following that showing were two of the most dominant performers ever to grace the squared circle as Goldberg (c) defended the Universal Championship against Brock Lesnar.

An explosive start filled with suplexes and spears drawed a huge encore of cheers from the sell-out crowd and after just five minutes, suplex city became the new home for the Universal title.

What was originally a pre-show match quickly found its way to the second to last spot on WrestleMania as the women of SmackDown Live competed in a six-pack challenge for Alexa Bliss' championship.

A long and special entrance for hometown girl Naomi basically confirmed that she would be walking away with the gold, a smart choice but in a match that acted as filler for the main event, it did not capture the special moment many were hoping for. 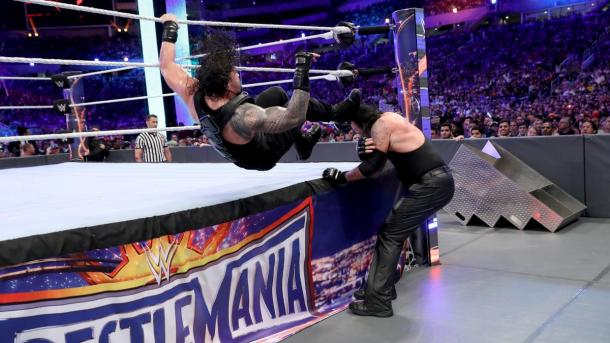 This will be written through tears, The Undertaker took on Roman Reigns in a battle for supremacy, a fairly positive match as both superstars got in their fair share of offence.

Soon however, it became clear that the youth of the Big Dog was too much for the old-timer to handle but he would not go down without a fight, with Jim Ross on commentary the realisation of the magnitude of this bout hit home fast.

Not even two spears could put down the Deadman who crawled for a steel chair for one last gasp of a comeback but a stomp onto the metal from Reigns halted him in his tracks.

A final powerful spear after a series of superman punches eventually put 'Taker down for good as the entire Camping World stadium looked on in hatred. 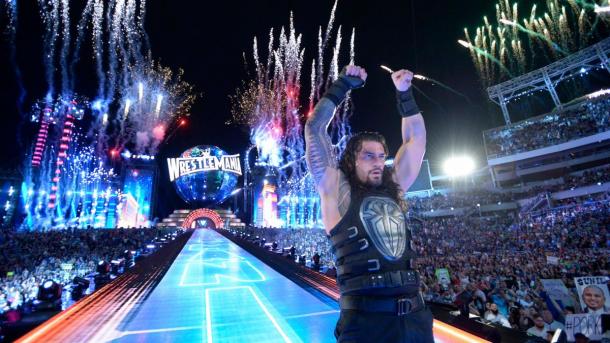 No matter if there was or was not a heel turn, there is no going back for Reigns he is the no.1 heel in WWE today and because of what happened after is why.

"Thank you Taker" rung out as the sudden reality of what was happening dawned upon the WWE Universe, the veteran kissed his wife Michelle McCool before making his way up the ramp. 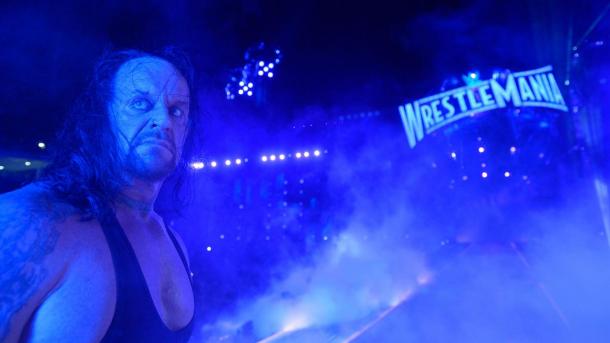 He turned his head slightly and issued his signature arm raise and a hatch opened up as he descended down, the final image of not only the Undertaker but a legacy and an era.

Author's note: WrestleMania 33 will go down as one of the greatest culmination shows in WWE history. So many moments were created in Orlando and the fans in attendance, including our own editor Matthew Wilkinson, should treasure their experience for the rest of their lives.

Watching on from home, with a tear down my face as The Undertaker made his final exit from pro wrestling is something I will remember forever but from the bottom of my heart, #ThankYouTaker