Chelsea picked up a much-needed win in the Champions League on Tuesday night, building on their win against Crystal Palace with a commanding 3-0 victory over AC Milan.

Despite being winless in their first two games the win puts Chelsea second in the group at the half way stage.

Helped build out from the back and made a good close range save just before the half-time whistle. With Edouard Mendy back from injury it could be a tough decision for Graham Potter on his permanent No.1.

Scored the opening goal and looked comfortable in his first Champions League game at Stamford Bridge. Unfortunately had to be taken off with an injury. Hopefully he isn't out for too long.

Was once again a calm figure in an at times shaky Chelsea back three. Won a number of ariel battles at the back and going forward including the header that led to the opening goal.

Looked shaky on a number of occasions in the first half but kept going and helped build out from the back. Another player who may be fighting for his starting spot.

Created a number of good chances on the right hand side and formed a formidable attack with Sterling for large parts of the game. A great cross to catch out Tomori to create the second Chelsea goal and a thunderous strike to seal all three points.

Had a tough task playing up against Leao but did his job very well going back and going forward. 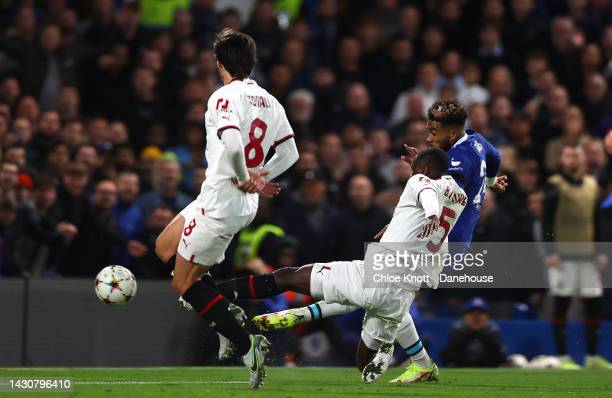 A lot of running and good intentions from Chilwell with little coming off for him. Defensively very solid but for a man with Marc Cucurella as his competition he may need to do more to keep his spot.

A classic Loftus-Cheek performance. Some good driving runs and passing play at times. At other times looking sloppy on the ball and disinterested. May need more time before he finds a home in Graham Potter's system.

Looked bright throughout the game, making a number of incisive passes while also bearing the brunt of the defensive responsibility in midfield. Another really good performance from the Croatian.

A difficult start to the season for the Cobham graduate who once again struggled to get his game going. However, he looked a lot closer to his former self in this game and had a beautiful finish ruled out by VAR.

A standout performer for Chelsea this season and once again he was the main force going forward for the Blues. The partnership he is forming with James on the right-hand side which resulted in the third Chelsea goal could be crucial this season.

Had very little impact on the game in the first half. However in the second-half he was at the right place at the right time to slot in a cross from Reece James, building on his first Chelsea goal against Crystal Palace with another.

Had a nervous start to his game with Leao driving towards him on the edge of the box. Came into his own as the game progressed and helped earn Chelsea a much needed clean sheet.

Helped see Chelsea through the last 25 minutes and offered some fresh legs at the front end of the pitch.

Similar job to Gallagher - the Italian helped maintain control of the game for Chelsea.

Didn't have a difficult job to do and helped see out the game, giving others a rest.

Always good to see another Cobham graduate get minutes in the Champions League.

Could arguably do little about any of the Chelsea goals but still looked shaky in goal for Milan. Maignan is a big miss for Milan and tonight only further proved why.

Not the homecoming Fikayo Tomori would've predicted or wanted on his return to Stamford Bridge. Was caught out for the second Chelsea goal but did make a number of important tackles throughout the game.

Looked unsure at set-pieces and got pulled about throughout the game by the Chelsea attack.

Made a few good runs in the first half but offered very little as the game wore on. Struggled with the overloads created by Chelsea out wide.

Similar to Dest in many ways. He struggled to make his mark at either end of the pitch and was caught out a number of times on the counter-attack. Looked nervous throughout the game.

It looked like a battle between Bennacer and Tonali on who could play as the deeper central midfielder. By playing so close to the Milan back four, he failed to get the attack started. Lost a number of aerial battles against Silva including one that led to the opening goal.

Fared better than his midfield partner with a few penetrative passes through the Chelsea midfield, including a brilliant switch of play to Leao. Left his defence exposed on a number of occasions and will want to redeem himself at the San Siro.

Despite having arguably Milan's best chance of the game he failed to offer any attacking threat from his wide position.

The player many Chelsea fans saw as the danger man and he showed why. Made a number of good runs and gave Reece James a good test before making way midway through the second half. Keep an eye on him at the San Siro.

Made a number of good movements in between the lines at the start of the game but had drifted out of the game long before he was replaced.

If Tomori's homecoming left a lot to be desired then not much more can be said for the French forward's return to Stamford Bridge. Taken off part way through the second half without any complaints.

Didn't have a chance to impact the game.

Came on to try to rejuvenate the Milan attack but found his opportunities limited.

Didn't offer the same threat as Leao who he replaced.

Came in to save a midfield battle that had already been lost.

The remarkable rise of Enzo Fernandez a month ago

"Looking forward to going back": Graham Potter opens up amid Brighton return 3 months ago

Exclusive: Trevoh Chalobah wanting to leave Chelsea in January amid lack of game time 4 months ago