The 2017 season on the ATP World Tour got underway last week and with three tournaments there was plenty of action to welcome in the new year! Titles were up for grabs in Brisbane, Chennai and Doha, featuring the world's top ten players, including world number one Andy Murray and the long anticipated return of Rafael Nadal.

We got the dream final at the Qatar Exxon Mobil Open with world number one Andy Murray taking on the defending champion Novak Djokovic and it was the world number two who triumphed 6-3, 5-7, 6-4 to win the first ATP Tour title of 2017.

Murray navigated his way past Jeremy Chardy in the second round comfortably enough but had two tricky ties to follow. Gerard Melzer impressed many as he gave a fine account himself in pushing the top seed to a tiebreak in a first set lasting one hour and 20 minutes, eventually securing it on his ninth set point. The second set was almost as close, with the Scot taking it 7-5 to set up another tough clash with Nicolas Almagro, which he won by the same score line. Ironically it was his semifinal match against Tomas Berdych which was his most convincing victory, dispatching the third seed 6-3, 6-4 to secure his 28th consecutive ATP Tour victory.

Contrastingly, Djokovic had an incredibly tough semifinal with Fernando Verdasco, getting pushed to the limit as he faced five match points in a pulsating second set. The Serb recovered from 6-2 down in the breaker having lost the first set 6-4 and gone down an early break in the second. This remarkable comeback saw the world number two prevail 4-6, 7-6(7), 6-3, the first time that the 12-time Grand Slam champion had saved five match points on his way to victory since defeating Murray in the Shanghai Rolex Masters final in 2012.

With the top two teeing off in the final, their 36th meeting in all, the Doha crowd were not disappointed! It was the defending champion surprisingly who looked to be crushing to the title as he appeared to have the edge over his rival, stepping up to the line to serve for the match leading 6-3, 5-4. At 30-0, it looked all but over, however, a nervy looking double fault gave Murray a lifeline and after showing fightback qualities that only the greatest possess, the Brit saved three championship points before breaking the Serb for the first time in the match, the 122nd match in a row where the world number one has managed to break his opponents serve. With the crowd fired up Murray completely turned the match around, winning five games in a row as he took the second set 7-5 and moved 1-0 in front on serve.

It looked as though the Brit was on his way to defeating his old nemesis from a set down for the first time in his career as he moved to 0-30 on the world number two’s serve at 3-2 in the final set. However, spectators were treated to seeing the Djokovic of old as the Serb roared back, holding serve and breaking the two-time champion in Doha to love before he closed out the set and match 6-4 to secure a confidence boosting victory. If these two keep that level up then we are in for one heck of a final at the Australian Open in three weeks time!

Looking at the field ahead of the tournament in Brisbane, featuring the likes of Milos Raonic, Stanislas Wawrinka and the anticipated return of Nadal, not many would have tipped seventh seed Grigor Dimitrov for the title. The Bulgarian lit up the court in the Pat Rafter Arena throughout the tournament, capping it off with a victory over third seed Kei Nishikori 6-2, 2-6, 6-3 in a thrilling final to win the Brisbane International.

The 25-year-old showcased to us what made one of the sports' hottest prospects back in 2014, with the Bulgarian making the semifinals at Wimbledon, winning the title and Queen’s Club and breaking into the world’s top 10. However, since then he has been a shadow of his former self, losing his last four finals before this victory, including tough losses to Viktor Troicki in Sydney, where he had match point, and he squandered a set and 5-2 lead against Diego Schwartzman in Istanbul.

After putting together a strong training block in the offseason it has quickly paid diffidence for the Bulgarian, scoring a significant win first over world number eight Dominic Thiem 6-3, 4-6, 6-3 and then even more impressively over defending champion Raonic 7-6(7), 6-2 in the semifinals. It was the Canadian who ended Nadal’s first tournament of 2017 with a 4-6, 6-3, 6-4 win, despite the Spaniard leading by a set and having break points up 3-2 in the second he could not get the job done, but there were positive signs for the 14-time Grand Slam champion this week nonetheless.

Nishikori made his way into the final with relative ease, only dropping a set in the second round before crushing past Jordan Thompson 6-1, 6-1 in the quarterfinals and stunning second seed Wawrinka 7-6(3), 6-3 in the semifinals.

In the final the Japanese star started off the stronger of the two, earning break point opportunities in both of the Bulgarian’s opening service games. However, Dimitrov had only lost 40 of his 42 service games prior to the final and that confidence behind his serve led him to escape from trouble and roll through the first set thereafter, taking it 6-2. At 2-2 in the second set the match took a different turn as the seventh seed fell down 0-40 and could not recover, giving Nishikori his first break of the match.

That proved to switch the momentum completely as the third seed held to love in a 1 minute and six seconds service game, before breaking again and sealing the set 6-2. With both players having lost their last four ATP finals a lot was on the line, but it was the Bulgarian who held his nerve, taking the final set 6-3 to win his first title in over two and a half years. Based on what we have seen this week, this could be the start of a very special season for Grigor Dimitrov!

Roberto Bautista Agut celebrated winning his fifth ATP Tour title after defeating Daniil Medvedev 6-3, 6-4 to win the Aircel Chennai Open. Playing here for the fifth season running, the Spaniard did not have it all his own way, having to bounce back from a set and 4-1 down to Mikhail Youzhny in the quarterfinals, before defeating Benoit Paire 6-3, 6-3 in the semifinals. Meanwhile his opponent, 21-year-old Medvedev had a memorable week, saving a match against Dudi Sela in the semifinals to reach his first ATP World Tour final, prevailing 4-6, 7-6(2), 6-2.

In the final, the Spaniard secured an early break to take a 3-1 lead and that was enough to wrap up the first set. In the second the ATP Next Gen start battled hard, trying to stay with the second seed, but eventually relinquished serve in the ninth game before Bautista Agut closed out the match 6-4 to win the title! 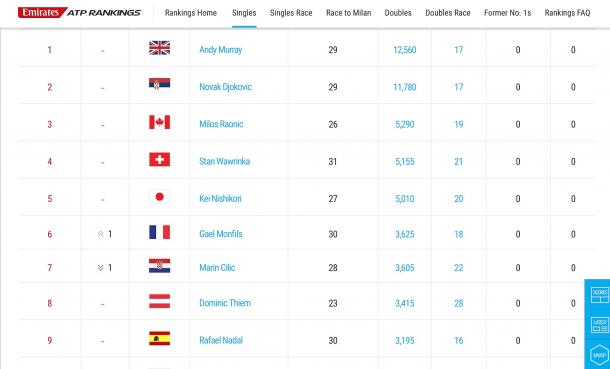 Djokovic maintained his points with victory in Doha, but Murray was able to extend his lead at the top of the rankings by making the final, now leading by 780 points. This week's other champions saw their rankings improve, Bautista Agut rose one place to 13 and Dimitrov moved up two places to 15. Gael Monfils and Marin Cilic swapped places in the rankings at six and seven respectively.

There are two ATP 250 events available for players to compete in who are looking for some last minute competitive preparation ahead of the first Grand Slam of the year at the Australian Open. World number eight Thiem headlines the field in Sydney along with world number 22 Pablo Cuevas and defending champion Viktor Troicki. Meanwhile, Auckland also features a star-studded field including Chennai champion Bautista Agut, world number 19 John Isner, plus David Ferrer and Hopman Cup runner-up Jack Sock.